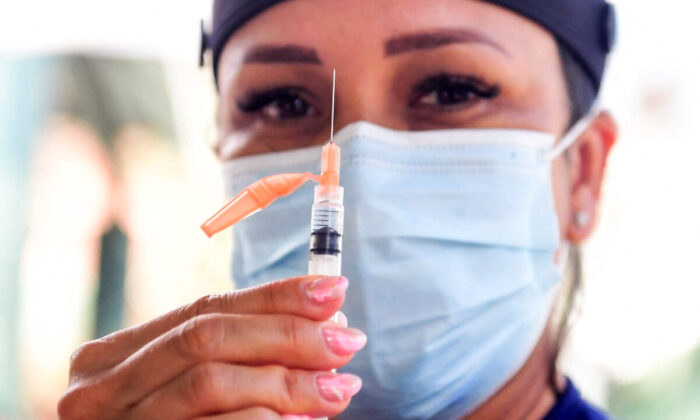 People who received the Johnson & Johnson single-shot COVID-19 vaccine were more likely to experience a certain type of blood clotting issue than individuals in the general population before the start of the pandemic, according to a study published Nov. 1, although researchers said that the blood clots are rare.

Researchers with the Mayo Clinic, who published their findings in the JAMA Internal Medicine journal, obtained data on blood clotting from Olmsted County, Minnesota, between 2001 and 2015. They then compared rates of blood clotting with those who received the Johnson & Johnson shot.

Individuals who got the vaccine were 3 1/2 times more likely to develop cerebral venous sinus thrombosis (CVST) than among the general population between 2001 and 2015, they found. The researchers said the study adjusted for sex and age to make a comparison.

CVST occurs when a blood clot occurs in the brain’s venous sinuses, which prevents blood from exiting the brain, according to Johns Hopkins University. The cells then may break and leak blood into the brain’s tissues.

They found that that the pre-pandemic Olmsted County group reported 2.46 cases of CVST per 100,000 people. The group who got the vaccine saw 8.65 cases of the condition per 100 ,000 people, according to their research.

“In this population-based cohort study, we found that the CVST incidence rate 15 days after [J&J] vaccination was significantly higher than the prepandemic rate,” the researchers said. “However, the higher rate of this rare adverse effect must be considered in the context of the effectiveness of the vaccine in preventing COVID-19.”

Mayo Clinic researchers used data acquired from the Centers for Disease Control and Prevention Adverse Event Reporting System (VAERS) between Feb. 28 and May 7.

The “highest at-risk period” for CVST is within 15 days of receiving the J&J vaccine, they noted, adding the “highest risk was among women aged 30 to 49 years, but the absolute CVST risk was still low in this group.”

“The reason that women had a higher incidence of postvaccination CVST is unclear,” the study stated.

Representatives for Johnson & Johnson didn’t immediately respond to a request for comment.

In October, J&J said the “safety and well-being of every individual who receives a Johnson & Johnson product remain our top priority” after officials in King County, Washington, said a woman died after receiving the vaccine.

“Any adverse event report about individuals receiving Johnson & Johnson’s single-shot COVID-19 vaccine, as well as our own assessment of the report, is shared with the U.S. Food and Drug Administration (FDA), European Medicines Agency, the World Health Organization (WHO) and other appropriate health authorities where our vaccine is authorized,” the company stated at the time.

Earlier this year, federal health officials temporarily suspended the use of the Johnson & Johnson vaccine, which uses an adenovirus, but officials later resumed its usage on April 23 after determining that the benefits outweigh the risks. Both Pfizer’s and Moderna’s COVID-19 vaccines use mRNA technology.

Among the three vaccines approved for use by the FDA, Johnson & Johnson’s is the least-used, accounting for about 4 percent of all doses administered in the United States.

Pfizer’s and Moderna’s vaccines, according to numerous studies, have been associated with an elevated risk of myocarditis, or inflammation of the heart muscle. Health officials have said that the condition is rare and have frequently said the benefit of the vaccines outweighs the myocarditis risk.

Over the weekend, Moderna confirmed that the FDA informed the drugmaker that it needs more time to review its application to use the vaccine among 12- to 17-year-olds, while the firm also announced it would postpone seeking FDA approval for younger age groups.