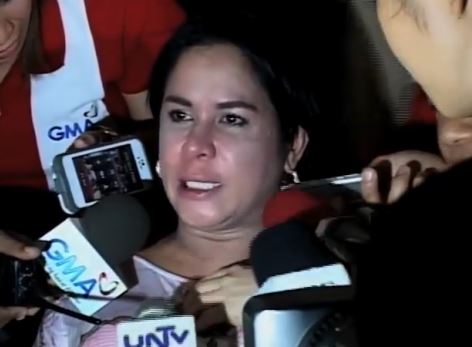 Jinkee Pacquiao, Manny Pacquiao’s Wife, in Tears As She Asks Manny to Retire

Manny Pacquiao’s wife Jinkee Pacquiao believes that the time is now for the famed boxer and Filipino congressman to retire from boxing and focus on his family and other work.

Jinkee, who is in General Santos City waiting to give birth to her fifth child, told Pacquiao that money isn’t worth more than his family.

She said that Pacquiao has nothing left to prove after beating American Timothy Bradley in the rematch.

She said that she supports her husband in his boxing career but that “he is not getting any younger.”

Pacquiao, now 35, lost several matches in a row–to Bradley, then to Juan Manuel Marquez–prompting him to take a break until last fall.

He has now won two straight after beating Brandon Rios in November 2013 before beating Bradley on April 12, 2014.

“He did his best,” Junkee said. “He can retire anytime.”

Jinkee revealed that the family is planning a much-deserved vacation to an unspecified spot regardless of whether her husband retires.

After the win against Bradley, there is talk of Pacquiao fighting Floyd Mayweather Jr. at some point.

“I can fight for a couple more years,” Manny said in an interview on HBO.

There’s no set date for the match, which has been tried before but didn’t end up happening.