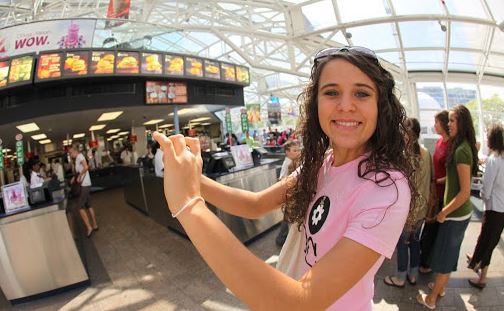 Jinger Duggar in the Air and Space Museum in Washington D.C. in 2010. (Duggar Family)
Entertainment

The “Free Jinger” movement, which seeks to help perhaps the most independent of the girls in the Duggar family escape, has been highlighted recently.

The movement spawned a website dedicated to criticizing the large family as well as discuss ways to help Jinger “break free” of Jim Bob and Michelle, her parents.

Jinger, 20, is the fourth-oldest girl in the family. Her older sisters Jessa and Jill just got married. Jana, the oldest daughter, is notoriously single, as is Jinger.

“Jinger is one of the middle Duggar daughters, and the only one who shows a spark of life. If anyone is going to break out of the Duggar Borg, our money is on Jinger. One theory is that she resents her name being misspelled just so her family could keep their J streak going,” according to the Free Jinger website.

The team also tries to keep an eye on the entire family as well as other related families and movements.

“What you call gossip, we call keeping our eyes on a dangerous religious movement. We believe that criticism, snark and laughter is the best way to call attention to some serious problems such as child abuse, rape, oppression of women, loss of rights, and the groups who perpetrate these things. We are shining a light, because it burns away the darkness,” the website explains.

The hashtag #FreeJinger frequently gets pickup during airings of 19 Kids & Counting.

Jinger has shown signs of independence, and being different from the other girls in the family. She even went hunting with a bunch of the boys during an episode a couple of years back.

“I guess you feel like you have a lot of control and power when you’re behind this huge gun,” she said with a smile. “It was just loads of fun, attempting to shoot the target.”

She’s also known for wearing pants sometimes, while her sisters and mother pretty much always wear skirts or dresses.

A number of other sites have said that Jinger should try to “escape” from her family.

“Let’s Hope Jinger Duggar’s A Fast Runner, Because This Is Prime Time For Her To Escape,” went one recent article from Crushable.

“Jinger is indisputably the most artsy and free-spirited gal of the Duggar bunch — in fact, she’s not a bad photographer. I would hate to think that Jinger would give up something she loves and is naturally good at in favor of getting married and starting a family at her parents’ request,” it said.

“Nothing would make me more thrilled than to see Jinger break free and start up her own photography company. If she can help run a family of 19 children, she can definitely run a business.”

The biggest piece of evidence that these sites use is a moment in 2012 where Jinger said that she wanted to move away.

In a video for one of the seasons of 19 Kids and Counting, the show that follows the family, Jinger indicated that she wants to leave the small Arkansas town that the family calls home.

“Jinger didn’t mean she wanted to move to New York City,” Michelle said. “She meant that she wants to live closer to a city. We’re talking right near a city, but not New York City.”

The family currently lives about four hours away from Little Rock, the capital of Arkansas.

“Jinger meant she wanted to live 15 minutes from a Wal-mart. We live so far out of town on 20 acres, but Jinger wants to live closer to town, so she doesn’t have to drive so far to go shopping,” she added. “New York City is way above what we would ever consider a city where she should move!”