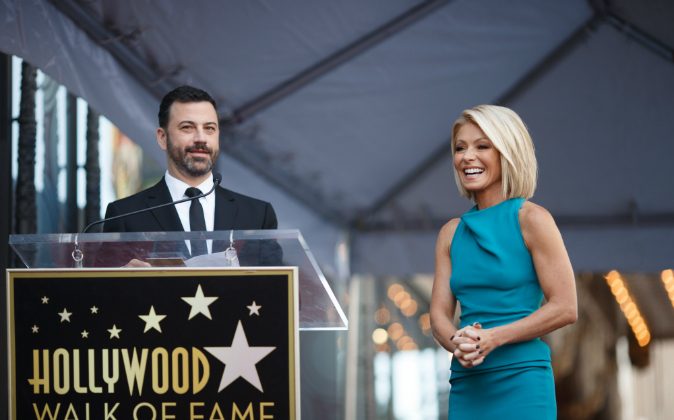 Let the musical chairs to find a permanent host on “LIVE!” begin!

On the first day post-Michael Strahan, Kelly Ripa welcomed Jimmy Kimmel as guest-host on the May 16 broadcast, who immediately delved into questions regarding the departure of Strahan. Strahan’s last show was on May 13 and will begin “Good Morning America” in September.

“Where’s Michael?” the late-night host asked Ripa after taking his seat behind the desk.

“Oh that’s right, you don’t read newspapers,” she replied without going into much detail about Strahan.

Ripa noted that Kimmel always serves as a guest host when needed.

The comedian admitted he came with 75 questions after taping the Howard Stern show Monday morning, questions that included the authenticity of the affection shared between Strahan and Ripa.

“We don’t fake hug and kiss,” she replied. “It wasn’t like air kissing. It was genuine.”

“[Executive Producer] Gelman, will you ever talk to Michael Strahan again?” Kimmel inquired.

Despite reports indicating that all traces of Michael Strahan have been erased from the show and set, Kimmel dispelled those rumors.

“There are millions of pictures,” Kimmel said of Strahan.

However, the retired NFL athlete’s name has been erased from the show’s profile, merchandise and social media accounts. On a coffee mug that read “LIVE! With Kelly,” Kimmel wrote “Jimmy” in black dry erase marker underneath Ripa’s name.

Don’t forget to reset your DVR/PVR to “Live with Kelly”! On tomorrow’s show we have guest co-host @jimmykimmel, #Gordonramsay, @priyankachopra, & @americanauthors performs! #LiveKelly

Additionally, Kimmel brought along a wheel for Ripa to spin so that she could choose from several options for a co-host to replace Strahan. Kylie Jenner was a suggestion, because Kimmel indicated the two names “had a nice ring to it.” Ripa joked that her teenaged daughter, Lola, might actually tune into the show if Jenner were a co-host.

Chopra jokingly referred to Kimmel as Michael, stating how different he looks.

“I got my teeth fixed,” Kimmel joked.

In the last moments of the show, Ripa thanked Kimmel for his appearance, calling him an “incredible friend.”

Kimmel wiped his name off of the mug and wrote in Jussie for “Empire” actor Jussie Smollet, who will serve as a guest host on Tuesday’s airing.