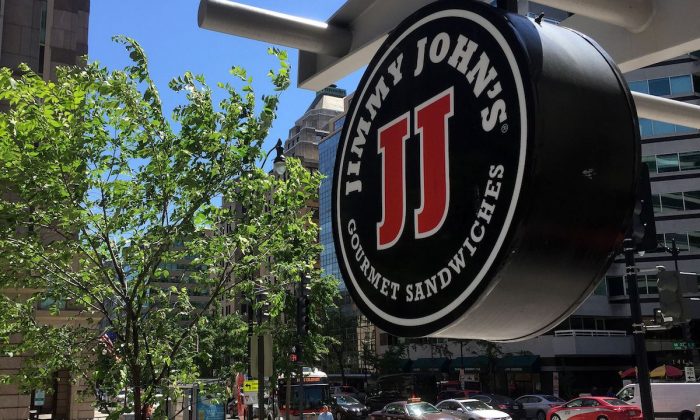 A logo of the sandwich restaurant chain, specializing in delivery Jimmy John's hangs outside one of their shops in downtown Washington, DC, on June 9, 2016. (Mladen Antonov /AFP/Getty Images)
US News

An Illinois family has shared a video that shows the moment a Jimmy John’s delivery driver putting his mouth on a drink he was about to hand over to his customer.

In the video, the delivery person can be seen standing outside a suburban Chicago house as he waits for the homeowners to answer the door.

While holding a box of food in one arm, the man appears to look down at the soda in his other hand before casually pressing his mouth on the lid where the straw goes.

A few moments later, a man comes to open the door and the delivery person hands off the order. He then waits patiently for his tip before heading off down the sidewalk.

Homeowner Emily Brems, who placed the order, told NBC 4 that her 12-year-old son was the one who saw the surveillance footage and alerted his parents to what happened.

“My son came upstairs and said, ‘Just so you know the delivery guy licked your drink,'” said Brems. She added that the family did not eat any of the food and called the Jimmy John’s restaurant right away.

“Our first instinct was like, ‘Nobody eat anything, nobody touch anything,'” Brems told Inside Edition. “Our biggest thought was, ‘What if he’s sick? What if he had something we could have caught?'”

Woman Jumps Off Cliff Everyday to Deliver Food to Co-workers

Banti Singh, the owner of the fast food chain, said in a statement to NBC that “the behavior seen in this video is not consistent with the standards we expect from our employees and we have taken appropriate action with the individual involved.”

“We’ve formally retrained our employees on food safety and have made it right with the customer,” Singh said.

The restaurant said Brems would get a refund for her order, but did not mention whether or not the employee would be fired.

DoorDash, a food delivery service that sends its own drivers to pick up orders from restaurants and deliver it right to the customer’s door, fired one of its employees last week after she was accused of eating half of the order before dropping it off.

Chris Payton of York County, Pennsylvania, claims he ordered some ribs and waffle fries from a local barbecue restaurant via DoorDash, only to discover that half of it had been eaten, reported Fox News.

Payton told Fox News that he opened the box to find two of the six ribs he ordered were gone, and what appeared to be bite marks were left behind.

“I guess she just pulls over to the side of the road and just decides to have herself a little snack before she delivers,” said Payton.

In a statement to Fox News, the food delivery service said it had fire the driver soon after they learned about the incident.

“We sincerely regret that this incident fell short of the experience we strive to give our customers every day,” a DoorDash spokesperson said in the statement. “We reached out to this customer immediately after being notified of this event.

“We have since taken appropriate actions, including deactivating the Dasher from our platform for failing to follow and maintain our standards of food safety.”