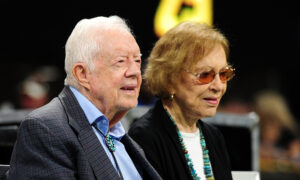 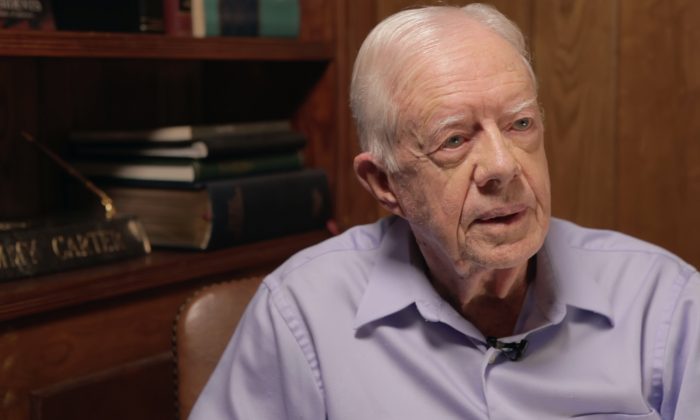 A shot from the documentary “Circle of Poison” about former President Jimmy Carter. (Courtesy of Evan Mascagni)
US News

Former U.S. President Jimmy Carter has been admitted to an Atlanta hospital for a brain procedure following several falls in recent months, his office said.

Carter, 95, was hospitalized at Emory University Hospital on the evening of Monday, Nov. 11, and is expected to undergo a procedure on Tuesday morning, intended to relieve pressure on his brain caused by bleeding due to his recent falls.

“President Carter is resting comfortably, and his wife, Rosalynn, is with him,” The Carter Center said in a statement on Twitter.

Carter, who celebrated his 95th birthday last month, has been admitted to hospital several times this year after a number of falls. He was also hospitalized briefly in 2017 for dehydration and was diagnosed with skin cancer in 2015.

He fell in May at home, breaking a hip. He then underwent surgery at the Phoebe Sumter Medical Center.

Carter also fell twice last month. The first time, he suffered a black eye and stitches above his brow. The second fall at his home left him with a fractured pelvis, and he was transported to Phoebe Sumter Medical Center for treatment.

“He is in good spirits and is looking forward to recovering at home,” the center said in a previous statement at the time.

He was released several days later, and Deanna Congileo, director of communications for The Carter Center said in a statement: “Former U.S. President Jimmy Carter has been released from Phoebe Sumter Medical Center. He is looking forward to continuing to recuperate at his home in Plains, Georgia, and thanks everyone for their kind well wishes.”

Despite his injuries, Carter made his way to Nashville on Oct. 7 with a bandage above his left eye and a large, red welt below it. Here, he prepared to help build a home with nonprofit Christian housing organization, Habitat for Humanity, where he has volunteered for 35 years.

Last week the former Democratic president also visited Maranatha Baptist Church in Plains, Georgia to teach Sunday school, where he talked about how he came to peace with the notion of death as he battled cancer.

“I, obviously, prayed about it,” he said. “I didn’t ask God to let me live, but I just asked God to give me a proper attitude toward death. And I found that I was absolutely and completely at ease with death.”

“It didn’t really matter to me whether I died or lived. Except I was going to miss my family, and miss the work at The Carter Center and miss teaching your Sunday school service sometimes and so forth. All those delightful things,” he added.

On his 95th birthday on Oct. 1, Carter became the oldest living former U.S. president—a title formerly held by George H.W. Bush, who died at the age of 94 last year.