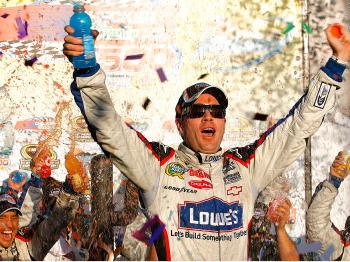 Johnson started third behind Martin Truex and Kurt Busch. Kurt Busch took the lead and held it until lap 57, when Jimmie Johnson passed him, striking when Busch slowed to maneuver past lapped a car. Busch retook the lead on lap 74, but Johnson pinned him behind a slow car yet again to move into first place on lap 90. Johnson held the lead for almost the entire remainder of the race. Overall he led 238 out of 312 laps, earning himself the bonus for most laps led.

Johnson’s points lead is now 108 over Mark Martin, and 169 over Jeff Gordon. If Johnson finishes 25th or better at the season finale at Homestead, the title—and the record—will be his.

"What a great car; what a great race team. We could have easily been beat down, and certainly there were some dark moments over the last week, worrying about the points lead and what we lost, but these guys bounced back," Jimmie Johnson said after the race. “We bounced back, qualified well, ran well in practice, had great stops all day long, and dominated this race.

“We have one more race to go; we saw in Texas, anything can happen, so we don’t need to get too excited about things, but One Oh-something is better than seventy three," referring to his points lead after today’s win. Johnson said his crew got the car working after his first pit stop, and his car stayed strong as track conditions changed through the course of the race.

“In the first run the car was real loose, and then after that the car was pretty dang good. The 2 [Kurt Busch] was really strong, which I expected to see, and the 11 [Denny Hamlin.] I thought I was falling off, and they were going to come get me at some point, but their cars fell off more, and off we went.”

“I knew Mark was having a good day. I could see him coming up through the pack at the start and I just really tried to ignore what he was doing because he is Mark Martin, and I know he and that team are going to finish well.

"I just had to get all I could and lead as many laps as possible, try to win the race and just do everything I could on my end and I did.”

When told he could win the championship by finishing twenty-fifth, Johnson responded, “That’s a great position to be in. We finished thirty-eighth last week. Going into this next week we just need to show up and race smart and do our thing.”

Jimmie Johnson doesn’t plan on laying back and playing it safe at Homestead.

"Going into the race next weekend I need to show up Friday ready to sit on the pole and go from there and run up front. The safest place is up front, the top two or three, and if we can stay there we’ll be in good shape.”

Jeff Burton made an excellent late-race charge, after running outside the top five for the first 185 laps. As the day drew on, his car improved, and on lap 252 he passed Mark Martin to take third. Burton battled Denny Hamlin for 27 laps, finally getting by him on lap 279. But Burton could not close on Jimmie Johnson; he had to be satisfied with runner-up.

This was Burton’s best finish of the season, and even more amazing because Burton qualified thirty-sixth.

“These races are won in the shop,” Burton explained, “and we’ve been working real hard, trying to improve our equipment. [New crew chief] Todd Berrier has come in and done a great job, the team’s done a great job. We had one hiccough early on pit road but the rest of them we picked out our spots every single time, and that’s what it takes; it takes a team effort.

“I lost this race for us on Friday, to be honest. We’ve got to qualify better than thirty-sixth with a car like that. I told Todd Berrier yesterday ,it’s a shame to qualify that bad in a car that fast that’s on my shoulders

“We changed everything but the kitchen sink in this thing and we finished third again at this racetrack,” Hamlin said. “This is our fourth straight third-place finish and no matter what set-up we have in it, we finish third. We had a shot at the 48 on that last run that was when he was most vulnerable, and that’s my pit crew did an awesome job of closing that gap on pit road. Our FedEx Camry was strong, but just not strong enough today.”

Mark Martin ran well early in the race, running third for much of the first third of the race, then moving up into second. He had the fastest car on the track before the first round of pit stops.

On lap 130, Denny Hamlin passed him, and for the next 130 laps, Martin dropped. After the final pit stop, Martin’s car started working again, but he couldn’t make up the positions he had lost.

Martin is now 108 points behind Jimmie Johnson, and has to face the fact that unless Johnson breaks or crashes at Homestead, Martin will not win the championship this year.

Mark Martin has finished second in the championship four times in his career; 2009 looks to be the fifth.

Jeff Gordon, third in the points race, was all but eliminated from contention by his ninth-place finish.

“I thought we were going to be great. It just got away from us," Gordon said. “We weren’t very good on the restarts, and it was a ninth-place day for us. A little disappointing, because I thought we were going to be better than that but even if we had been a third or a fourth place car, the 48 did what they needed to do, which is no surprise. We’ve seen them do it many times. That’s why they’re three-time champs, soon to be four-.”

Phoenix is an asymmetrical oval; Turns One and Two are tight and banks at eleven degrees while Turns Three and Four are wider and banked at nine degrees. Crew chiefs have to set up the cars to run better at one end or the other. The track gets slippery in the heat of the day, and the heat and sliding tends to wear on tires. Late in the race, as shadows fall across Turns One and Two, crew chiefs have to make yet more adjustments, as the tighter turns get grippier while the flatter corners stay slippery.

NASACAR’s Sprint Cup had never run double-file restarts at Phoenix, and series officials were worried that cars would bunch up coming down the front as it narrowed into Turn One. As it turned out, their concerns were well-founded. The race ran smoothly for the most part, with only four cautions. The first came on lap 116, when debris was spotted in Turn One. On the restart on lap 120, the front of the field slowed while the back of the field was still accelerating, causing a six-car collision which crumpled the front end of Michael Waltrip’s car, damaged Brad Keslowski, Elliot Saddler, Robby Gordon and David Ragan, and brought out another caution.

“I was slowed down and didn’t have any power steering,” Michael Waltrip said. “Two people passed me to get in the wreck. I tried to turn right at a late moment and miss the 96 and I just couldn’t.”

Luckily, the drivers were more cautious on the second restart and the race resumed.

A yellow flag on lap 162 brought on another restart on lap 169. This time Dale Earnhardt Jr. got sideways, possible slipping on his own leaking oil. Earnhardt collected nine other cars as he slid across the track, including Brian Vickers and Bobby Labonte, whose cars were too damaged to continue.

“On the restart it got pretty dicey,” Brian Vickers said. “I saw the 88 sideways I tried to check up, but I had absolutely nowhere to go.”

“It was a jam up,” is how Bobby Labonte described it. “It’s just a tight part of the racetrack and when they restart there with new tires … I just got caught up in the wreck.”

Whoever Wins the Title, Hendrick Wins the Season

It is quite possible that Jimmie Johnson will not win the 2009 NASCAR Sprint Cup Championship. If what happened at Texas, happens at Homestead, Mark Martin could take the title. But no matter who wins the title, Hendrick Motorsports will be the top team of the 2009 season.

The top three drivers in the Chase—Jimmie Johnson, Mark Martin, and Jeff Gordon—all drive for Hendrick Motorsports. Jimmie Johnson is already guaranteed a top-three finish. Mark Martin will finish in the top three if he scores 25th or better at Homestead. Jeff Gordon needs to finish sixth or better, to guarantee Hendrick Motorsports a 1–2–3 Chase finish.

Nothing is certain. An accident or mechanical failure could dramatically change the Chase in an instant. But even if all three Hendrick cars failed to finish at Homestead, Hendrick Motorsports has already dominated the 2009 season, the fourth season in a row in which Hendrick Motorsports was the team to beat.

Team owner Rick Hendricks says teamwork and cooperation are the keys to his teams’ successes. “These guys work all year, sharing information. We go to Texas and Jimmie wrecks and we’ve got all the guys from all the teams working on the car. Everyone asked me, ‘Why would the 24 and the 5 try to help the 48?’ and I said, ‘You know, that’s what got us here, and these guys know that.’ I’m just real proud of them.”

“We set out to do that [dominate] every week, obviously,” he explained. “We wanted to come to Phoenix and have a solid run, keep the five in our sights … we were able to stay just ahead of them a little bit all day today. That’s really what we needed to do and obviously momentum is always a good thing to have on your side.

“They tried to knock a little bit of the wind out of our sails last week. Now we can do what we need to do and go to Homestead with the Lowe’s Chevrolet.

“I just couldn’t be prouder of these guys; these guys just don’t give up. I think the effort they showed last week trying to fix that race car to get all those points they could it was just fantastic."

No matter who actually wins the Chase, it is undeniable that Jimmie Johnson is the dominating driver in NASCAR. Johnson usually qualifies well, avoids the worst of the bumping and banging, doesn’t get into grudge-match duels with other drivers, and focuses on racing, not wrecking.

Some of the up-and coming drivers who are out to make names for themselves and who try, race after race, to prove that they are aggressive forces to be feared, might look to Jimmie Johnson’s professionalism. It is a proven path to victory, and nothing makes a name for a driver, like winning it all, four years running.