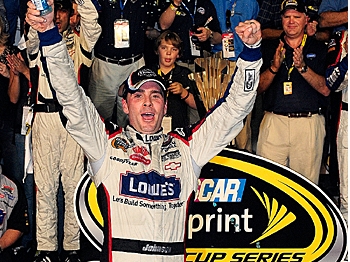 By James Fish
Print
Jimmie Johnson made NASCAR history, winning his fourth consecutive Sprint Cup championship, earning enough points with his fifth-place finish in the Ford 400 at Homestead-Miami Speedway on Sunday, November 22. No driver in NASCAR’s 61-year history has dominated the sport’s highest level for so many years in a row.

“It’s going to take a little while to sink in,” he told the crowd from the winner’s podium. “To do something that’s never been done in this sport … to love the sport and respect it like I do …the greats—Petty, Earnhardt, Gordon … to do something they have never done, is so awesome. What this team has done …. I don’t even know where to start. It’s unbelievable.”

Several drivers have won three or more titles, and Cale Yarborough won three in a row, from 1976–1978.

Looking back to the start of his season, Johnson said he had been confidant that he would do well, whether or not he won his record fourth championship in a row.

“I wasn’t sure that we’d be in this position but I knew that the team that we had and the changes we were going to make—adding Mark Martin—was going ot help us understand these cars a little bit more, with his experience … I felt like we’d have a shot. Late in the summer I wasn’t sure where we needed to be but when the Chase started, we all buckled down and got it right. I could have said I knew we were going to be here, but I didn’t know. Until we got through Martinsville, I wasn’t sure how it was going to go.

"I was devastated after Texas. I wasn’t sure how Phoenix was going to go, because it is such a good track for Mark and there is not telling here [at Homestead], it hasn’t been a great track for us but I am very proud of the effort we made here today with the Lowe’s car and I think we had a shot at winning that thing."

Johnson didn’t take it easy or play it safe during the race. He went for the win and accepted the risk.

“It was hair-raising at times. Everybody’s trying to get their best finish for the end of the year, and I got trapped in a couple positions that I didn’t really find enjoyable. But made it through … I don’t even know where we finished, hopefully in the top five.”

Denny Hamlin won the race, his fourth win of the season, fighting back from a dismal 38th-place qualifying effort.

Hamlin broke into the top five after a restart on lap 105 and stayed there for the rest of the race. Kurt Busch, Kyle Busch and Jeff Burton each wrested the lead from him, but Hamlin refused to stay in second. On lap 223 he moved to the front for good, winning the race by 2.6 seconds over Jeff Burton.

Though happy to have won the race, Denny Hamlin was already looking forward to winning the championship himself. “We’re going to be there I promise you; I promise, in the next couple of years we are going to win a championship.”

Hamlin finished better Jimmie Johnson in five of the ten Chase races, and didn’t finish [DNF] three of the other five, due to accidents or mechanical problems. “When you look at the final point standings and call a DNF a hundred points, we’re right there. But those guys [Jimmie Johnson’s team] have been the standard; they haven’t made mistakes and that’s who we ultimately want to be.

“I think we are showing that we have that strength to compete with those guys. It’s just they’ve done a phenomenal job. Four in a row for them I couldn’t be happier for them.”

Jeff Burton’s crew kept his car fast all day long; Burton led nineteen laps and was in the hunt for the win from lap 80 on.

Kurt Busch gambled by taking only two tires on his last pit stop, and the gamble didn’t pay off. Busch finished fourth, losing third place to Harvick with only three laps left.

Jeff Gordon fought hard in the final laps to finish sixth, the spot he needed to capture third in the Chase, edging out Kurt Busch by 27 points.

Dale Earnhardt Jr., the forgotten member of the Hendrick Motorsports team, added a tremendous amount of excitement to the beginning of the race, running much faster than everyone else, and running right on the ragged edge of adhesion to do it.

Earnhardt moved up from 32nd to seventh in the first sixty-six laps, running millimeters form the wall and occasionally brushing it. Eventually his quest for speed hurt him, as he knocked his front suspension out of alignment after brushing the wall just a bit too hard one time too many.

By lap 92 Junior had dropped to 17th, and finally finished in 28th, ending another prromising day with disappointment.

Homestead is a 1.5-mile banked oval, with progressive banking, which creates many different fast lines around the track. The track is slick in the heat of the day, but changes rapidly as evening falls. Cars that run perfectly in the first hour of the race, can be undriveable late in the day. The crew chiefs who can make the right adjustments can keep their cars in the hunt, and those who guess wrong, see their cars slip back through the field.

Mark Martin’s crew never found what they needed. As the race progressed, his car regressed, until by the race he was radioing his crew asking for some kind of encouragement, because his car was almost impossible, and his slim chances at a championship victory dwindled with each passing lap.

Martin ran well until a caution on lap 101. His crew’s adjustments didn’t help, but another yellow flag on lap 116 did, affording Martin’s crew another chance to get it right. Martin dropped to 25th after the second stop, and only progressed from there through sheer effort. That he finished twelfth, and on the lead lap, is a testament to his driving ability.

Tony “Smoke” Stewart and Juan Pablo Montoya added some unpleasantness to an otherwise exciting race by bashing into each other repeatedly.

Stewart’s car ran well early; Stewart took the lead on lap 33 and held onto it until a restart on lap 86. Then he slowly slipped back, as the track changed and his crew couldn’t find the right stet-up. Meanwhile, Montoya started charging to the front, getting up to second place.

After a caution on lap 101, Stewart restarted in fourth, Montoya in sixth and moving up. The pair battled for position, and on lap 115, Stewart edged ahead of Montoya and slid up in front of him, chopping sharply across the nose of Montoya’s car. Feeling insulted, Montoya rammed Stewart from behind, and then made his own passing maneuver on the inside.

Stewart retaliated by dropping down the track and sideswiping Montoya. The impact cut one of Montoya’s tires.

Fighting for control, Montoya slid up the track and slammed into the wall, then spun back down across the track.

Montoya had to take his car to the garage for repairs. Stewart’s crew was able to make repairs in the pits and Stewart rejoined the race in 32nd position.

Montoya rejoined the race and set off after Stewart. On lap 152, NASCAR warned both teams, saying "enough is enough and it's over."

Juan Pablo Montoya ignored the warning, and on lap 155, Montoya caught up to Stewart and rammed him into the wall, sending Stewart’s car spinning across the track. The rest of the field was lucky to maneuver by the spinning Stewart safely.

NASCAR awarded Juan Pablo Montoya a two-lap penalty for his antics. It is unlikely that Montoya, already 28 laps down, cared in the slightest.

It is exactly this sort of childish “tit-for-tat” on-track combat that keeps good drivers from becoming great drivers. Both Stewart and Montoya had shown themselves to be fast enough to run up front, but instead of working to stay competitive, they spent their energies playing bumper cars, throwing away any chance to finish well, and endangering everyone on the track

After this incident and the jousting between Brad Keslowski and Denny Hamlin is Saturday’s Nationwide race, which was also addressed by a brief penalty, it is evident that NASCAR doesn’t seriously disapprove of drivers deliberately wrecking each other.

Most ironic is that the Homestead race didn’t need an injection of artificial excitement. The race was a showcase of what NASACR can offer, with nonstop action, cars passing everywhere on the track, and multiple lead changes, all displaying the combination of pit work and driving that makes NASCAR racing worth watching.

Apparently NASCAR is afraid to alienate those fans that really do watch just to see wrecks.

Hopefully NASCAR officials will get serious about penalizing excessively aggressive driving before someone gets hurt.