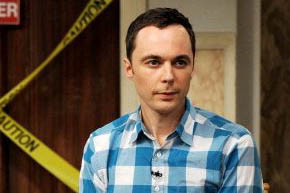 Jim Parsons Quits Big Bang Theory Season 8? Nope, but he’s not Sure About Next Season Amid Contract Dispute

An article saying Jim Parsons, who plays Sheldon, is quitting “The Big Bang Theory” is fake, but Parsons says he’s not sure if he’s returning.

The bogus article was posted on Empire News, which describes itself as “satirical” in nature. The article said Parsons quit after a “fight” on-set, but according to a disclaimer, it shouldn’t be taken seriously.

However, Parsons has said that amid contract negotiations, he’s not sure what’s going to happen before filming for Season 8 takes place.

Parsons and his co-stars still don’t have contracts. And the finale of Season 7 shows his character leaving on a train, which prompted some speculation.

Parsons gave an interview at Comic-Con last week but he was doing promotional work for “Home”–a movie from Dreamworks coming out next year. Parsons said he plays an alien in the movie, according to the USA Today interview.

“I haven’t read it yet,” he said. “I know Sheldon left on a train last season, and my first question was: Are you writing me off, which got a guffaw from the writer I asked.”

Parsons didn’t elaborate much further than that.

According to a report from The Associated Press, Parsons, Galecki, Kaley Cuoco, Simon Helberg and Kunal Nayyar still don’t have contracts as of yet. CBS Entertainment Chairman Nina Tassler told AP that they’re confident that the contract issue will be resolved.

Parsons was recently nominated for an Emmy for his role as Sheldon Cooper on the show. He also got a nod for his role in HBO movie “The Normal Heart.”

“I’m a little floored, I’ll be honest. The very first thing that hit me, and it took a while to sink in was, how lucky am I that I was a part of two different projects that have both been deemed mentionable, if you will, by the peers for this year. That fact alone I need to make sure I really let sink in and enjoy while it’s happening. Because it doesn’t seem to be a thing that probably is going to happen a lot. The odds are against it, no matter how good the work is,” he told EW.com a few weeks ago.