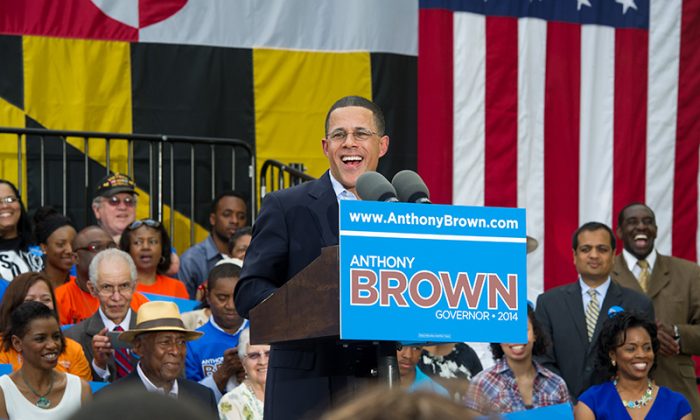 WASHINGTON—At a press conference at his campaign headquarters in Largo, Maryland, Lieutenant Governor Anthony G. Brown announced on July 8 that Jim Messina, 2012 Obama for America campaign manager, has signed on to his campaign team for Maryland state governor as a senior advisor. Brown also announced at the event that he has raised over $1 million since mid-April.

“As Democrats, we owe a great deal of gratitude to Jim Messina and his team for all that they did to reelect President Obama last year and I am humbled to have him as a part of my campaign to become Governor in 2014,” said Brown, according to WBAL.

“Jim Messina and I both know that campaigns are won one door at a time and that’s why we are mobilizing the biggest grassroots campaign Maryland has ever seen. I know that by building a diverse coalition of supporters from every corner of our state, we’ll succeed in our campaign to make Maryland better for more Marylanders,” Brown said, according to WBAL.

The Brown campaign kicked off in May with a free community cookout in Prince George’s County, and a community ‘meet and greet’ event in Silver Spring. Since the launch, Brown has received endorsements from numerous government officials including Governor Martin O’Malley.

“Anthony Brown has full support in his run for governor because I want to ensure that we continue delivering better results for Maryland families,” said O’Malley.

Brown, who would be Maryland’s first African-American governor, is a graduate of Harvard University and Harvard Law School, and a Colonel in the United States Army Reserves. On his website, it says he is one of the nation’s highest-ranking elected officials to have served a tour of duty in Iraq. Brown has served two terms as Lt. Governor for Gov. O’Malley. Prior to serving as Lt. Governor, Brown represented Prince George’s County for two terms in the Maryland House of Delegates, where he rose to the rank of Majority Whip.

Beside Brown on the campaign ticket for governor is running mate Ken Ulman, Howard County executive. Ulman was elected in 2010 for a second term as County Executive. Forbes Magazine has consistently named Howard County one of the “Best Places to Raise a Family,” and USA Today named Howard the “2nd Most Technologically Advanced County” in the nation, according to Ulman’s website.

Ulman and Brown are not the only politicians in the governor’s race with accolades to tout. Maryland Attorney General Doug Gansler is expected to announce his candidacy in the fall and run in opposition to Brown-Ulman in the Democratic primary. Gansler is currently touring Maryland conducting community discussions with Maryland residents about the issues.

“Over the next few months, I will travel across the state sharing my ideas and hearing from people. I intend to listen, to learn, to share, because Annapolis works best when it is focused on the day-to-day concerns of people,” said Gansler in a blog post on his website.

Gansler is campaigning on his record as attorney general in which he prosecuted polluters of the Chesapeake Bay, protected consumers from insurance fraud, and safeguarded the public from gangs, according to Gansler’s website.