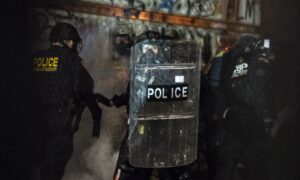 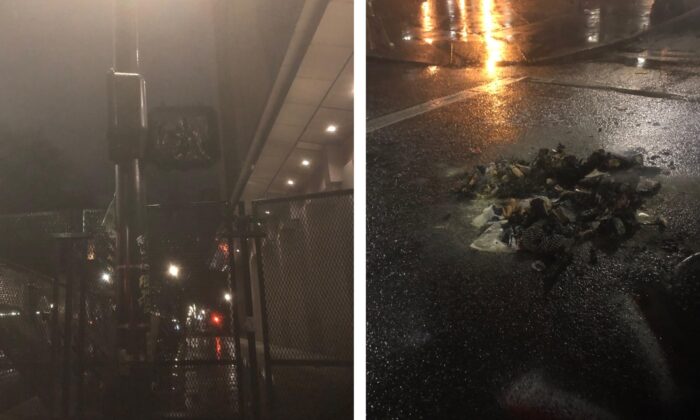 This collage of pictures shows a crosswalk sign near the Multnomah County Justice Center destroyed by fire (L) and a fire doused on Southwest Main Street during a riot in Portland, Oregon, on Dec. 31, 2020. (Portland Police Bureau)
Republicans

Rep. Jim Jordan (R-Ohio) is demanding answers from the head of the Justice Department and Department of Homeland Security on how the Biden administration is protecting federal property and personnel in Portland, Oregon.

The city saw persistent demonstrations last summer that eventually escalated into nights of violence and rioting following the death of George Floyd. The clashes with police and violent rioting saw extensive property damage, injuries, and deaths. A number of federal buildings, including a courthouse, were targeted and damaged significantly during the unrest.

Jordan sent separate letters on Monday to Attorney General Merrick B. Garland and Secretary of Homeland Security Alejandro Mayorkas seeking information on efforts the departments are taking to protect federal employees and property in Portland. Although the number of demonstrations has reduced, the city is still seeing outbreaks of violence around different locations in the city including at the Mark O. Hatfield United States Courthouse.

Just a day after protective fencing around the courthouse was removed in early March, rioters were seen trying to gain access into the building and set a fire at the building’s entrance. Other parts of town also saw protests that turned violent, leading to police intervention and arrests.

The letters also sought transparency on the department heads’ plans to “prevent future damage and destruction to federal property” in the city, and sought to understand whether the departments viewed such acts observed over the summer as criminal. The riots in Portland have caused at least $2.3 million in damage to federal buildings, U.S. Attorney for Oregon Billy J. Williams told Oregon Live. The price tag for fixing the damage could rise with repairs ongoing.

Other buildings that were damaged in the violence include Edith Green-Wendall Wyatt Federal Building, the Gus J. Solomon U.S. Courthouse, the Pioneer Courthouse, and the U.S. Immigration and Customs Enforcement building, Jordan said.

“The Biden administration has a duty to ensure federal law is enforced and that both federal property and federal personnel are protected and kept safe from violent extremists in Portland,” Jordan said.

In his letter, the ranking member of the House Judiciary Committee noted that the violence was exacerbated by $16 million in cuts to the Portland Police Bureau. This resulted in the dissolution of the bureau’s gun violence reduction team, school resource officers, and the transit police division.

The Trump administration last year sent federal forces to Portland to respond to the escalating violence in an attempt to protect federal buildings and monuments. At the time, the city faced over 100 consecutive nights of violence.

“Remarkably, the response from many in the media and local elected offices to this organized assault has been to blame the federal government,” Barr said. “To state what should be obvious, peaceful protesters do not throw explosives into federal courthouses, tear down plywood with crowbars, or launch fecal matter at federal officers. Such acts are in fact federal crimes under statutes enacted by this Congress.”

Jordan gave Garland and Mayorkas until 5 p.m. on April 12 to provide the requested information.