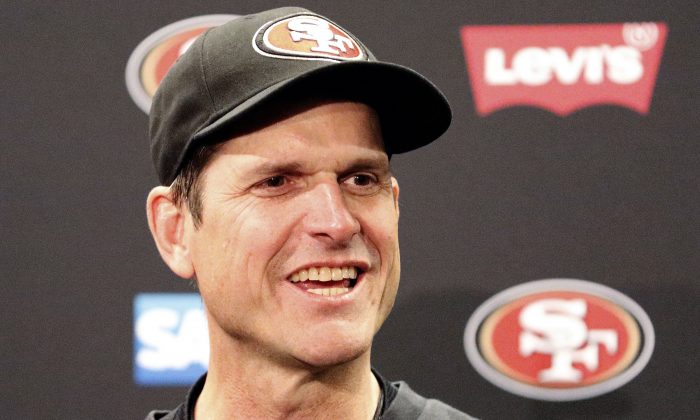 Jim Harbaugh, the former coach of the San Francisco 49ers, has signed a contract with the Michigan Wolverines, according to reports on Monday evening. San Francisco 49ers head coach Jim Harbaugh speaks at a news conference after the 49ers defeated the Arizona Cardinals 20-17 in an NFL football game in Santa Clara, Calif., Sunday, Dec. 28, 2014. (AP Photo/Tony Avelar)
NFL

Jim Harbaugh, the former coach of the San Francisco 49ers, has signed a contract with the Michigan Wolverines, according to a report from the Detroit News on Monday evening.

The figures of the contract were not disclosed.

There were rumors Harbaugh was going to sign with the school. However, Monday’s deal makes it official.

The Detroit News cited a source close to the talks for its report.

According to the publication:

Harbaugh has signed his Michigan contract, a source told The Detroit News on Monday night. Terms were not immediately known.

The source spoke to The News on condition of anonymity becuase Michigan had not announced that Harbaugh had been hired.

Harbaugh replaces Brady Hoke, fired on Dec. 2 after four seasons. This is Michigan’s third head coach since 2008. Rich Rodriguez was fired in 2011 after three seasons. The Wolverines have gone 46-42 since Lloyd Carr retired after the 2007 season, his 13th as head coach. They have endured three losing seasons, including the most recent 5-7 record. Michigan hasn’t won a Big Ten title since 2004.

Harbaugh’s Michigan teammates have unwavering confidence in the job he will do and how he will lead.

According to the Detroit Free Press:

After the news conference, U-M intends to introduce him to fans during its 3 p.m. basketball game at Crisler Center. In anticipation of that, tickets for the Big Ten opener with Illinois sold out Sunday.

Interim athletic director Jim Hackett has kept everything on the quiet, enough to scare his coaches from talking about what they know.

“We’ve had some contact and he’s kept me in the loop of what’s going on,” basketball coach John Beilein told reporters earlier today in his regular news conference. “I’d probably get fired if I told you what’s going on, so he’s kept me in the loop just enough. He and I will talk. I think he’s certainly done a good job thus far and I think everybody is excited how, in a very difficult time, has handled all this adversity.”

Meanwhile, philosophical differences came between San Francisco 49ers CEO Jed York and coach Harbaugh, and ultimately they were too great to be repaired or worked on to the extent of maintaining a winning relationship.

That is York’s take on what transpired anyway. He and general manager Trent Baalke addressed Harbaugh’sdeparture a day later in what the owner reiterated was a “mutual decision.”

Players, meanwhile, cleaned out lockers and packed their belongings into large cardboard boxes, and began fielding questions about what they want in a new coach. Many said they’d love someone a lot like Harbaugh.

Of the expected internal candidates, defensive line coach Jim Tomsula and defensive coordinator Vic Fangio, there is support for both. Neither York nor Baalke would say who they might interview in what they called an upcoming 7-10 day period.