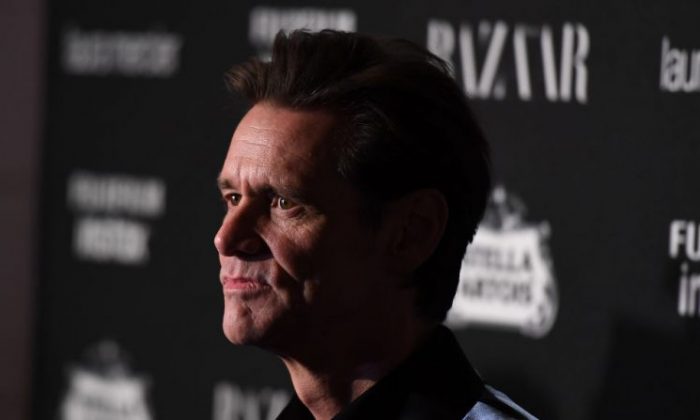 Just Look at the Reporter's Reactions
By Ivan Pentchoukov

Jim Carrey was in top shape at the Bazaar “Icons” party, although it was hard to tell if he was on a genuine existential journey or just putting on a good show.

“There is no me,” Carrey told an E! News reporter at the Harper’s Bazaar “Icons” party on Sept. 9. “There’s just things happening.”

Reporter Catt Sadler was taken aback by Carrey’s answers to her questions, looking back at the camera with her eyes wide open and her mouth gaping as though to check if the interview was really happening.

“I don’t believe that you exist,” Carrey told Sadler when she asked him a question about the event. “But there is a wonderful fragrance in the air.”

Asked why he was attending, Carrey mused about the meaninglessness of the event, before going into transcendental territory.

“There is no meaning to any of these, so I wanted to find the most meaningless thing that I could come to and join and here I am,” he said, prompting Sadler’s jaw to drop for several seconds.

Sadler tried to bring Carrey back to reality by pointing out that he’d dressed up for the occasion. Carrey wore a shimmering deep blue tuxedo.

“I didn’t get dressed up. There is no me,” Carrey answered as Saddler shook her head in amazement.

“There’s no you?” the reporter prompted back. “We’re not here? This is a dream?”

Carrey dove into metaphysics to respond.

“There’re just things happening,” he said. “And there’re clusters of tetrahedrons moving around together.”

After the interview drew a lot of attention on social media, Sadler sent a Tweet to clarify her feeling about Carrey.

“For the record, I loved him before the interview and I love him after,” she wrote. “Thank you for the unexpected dance, Mr. Carrey!”