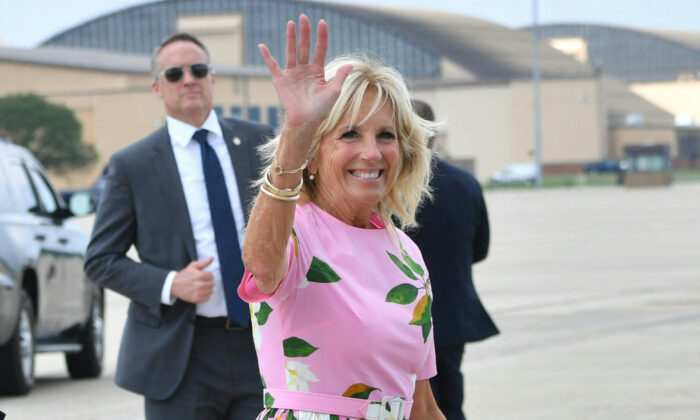 First Lady Jill Biden tested positive for COVID-19 in what appears to be a rebound case after taking Paxlovid, according to her office on Aug. 24.

“After testing negative on Tuesday, just now, the First Lady has tested positive for COVID-19 by antigen testing,” the first lady’s spokeswoman, Kelsey Donohue, said in a statement. “This represents a ‘rebound’ positivity.

“The First Lady has experienced no reemergence of symptoms, and will remain in Delaware where she has reinitiated isolation procedures. The White House Medical Unit has conducted contact tracing and close contacts have been notified.”

The 71-year-old Biden first tested positive for the virus on Aug. 16 while in South Carolina, according to her office, which also confirmed that she started taking a course of the Pfizer-made Paxlovid. The first lady has received both vaccine doses and two booster doses.

President Joe Biden, 79, also previously tested positive for COVID-19 after he returned negative tests for several days in a row. Like the first lady, he also took a course of Paxlovid. He left his second quarantine period on Aug. 6.

The White House stated on Aug. 24 that Biden will wear a mask for 10 days while he’s indoors.

“Consistent with CDC [Centers for Disease Control and Prevention] guidance because he is a close contact of the First Lady, he will mask for 10 days when indoors and in close proximity to others,” the White House said in a statement. “We will also keep the President’s testing cadence increased and continue to report those results.”

Another top official in the White House, Defense Secretary Lloyd Austin, tested positive for the virus earlier this month for the second time. The 69-year-old had undergone quarantine. Similar to the Bidens, Austin has received four COVID-19 vaccine doses in total.

The CDC issued an alert earlier this year that individuals taking Paxlovid may see a return in symptoms, known as “COVID rebound.”

“A brief return of symptoms may be part of the natural history of SARS-CoV-2 (the virus that causes COVID-19) infection in some persons, independent of treatment with Paxlovid and regardless of vaccination status,” the late May alert reads.

The CDC stated, “Limited information currently available from case reports suggests that persons treated with Paxlovid who experience COVID-19 rebound have had mild illness; there are no reports of severe disease. There is currently no evidence that additional treatment is needed with Paxlovid or other anti-SARS-CoV-2 therapies in cases where COVID-19 rebound is suspected.”