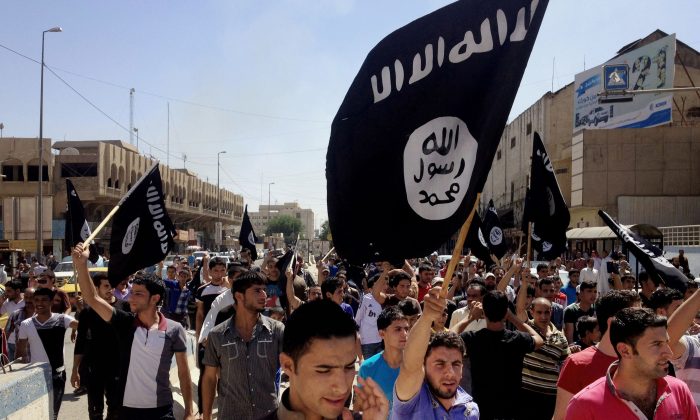 ISIS terrorists wave their flags in front of the Iraqi provincial government headquarters in Mosul in June 2014. The disparate groups that make up Iraq's security forces are converging on the city of Mosul, that is likely to be decisive in the war against ISIS. (AP Photo)
International

‘Jihadi Jack’ Says He Wants to Return to UK From Syria, but ‘No One Cares’

A man who has been dubbed “Jihadi Jack” told British broadcaster ITV that he wants to come back to the United Kingdom.

Jack Letts, who ran away to Syria in 2014, said he missed his mother and life in the UK.

“If the UK accepted me then I’d go back to the UK, it’s my home. But I don’t think that’s going to happen,” he said, adding that he doubts he would be released.

The Briton known as Jihadi Jack has told ITV News he is homesick and wants to return to Britain.

Letts, who is also a Canadian national, is currently being held in a Kurdish prison.

The man said he hasn’t spoken to his parents in two years, and doubted that UK and Canadian officials would “come and help me” because “no one really cares.”

Letts’s parents are slated to go to trial in the UK after they allegedly funded terrorism by sending their son money. They denied the charges, saying that their son went to Syria to help refugees.

“To be honest at the time I thought it was a good thing,” he said of the 2015 Paris attacks that left 130 dead, ITV News reported.

“Genuinely, at the time, we had this idea that when you’re living in Raqqa getting bombed every five minutes by coalition jets and you see literally, I’ve seen children burnt alive,” he stated.

Regarding the Paris attacks, he said, “At the time, you have this sort of—and this is what war does to you—you have this idea of ‘why shouldn’t it happen to them?’”

“But then I realized, they have nothing to do with it,” he added.

Letts also said he misses people in his home country.

“If I could make a request. I’m probably not in a position to make requests. That’s it all, really. I miss my mum,” he said. “What else do I miss? I miss pasties. It’s not really English—sort of Scottish isn’t it? I miss pasties. And Doctor Who. Sounds a bit stupid… that’s all.”

It comes days after two women said they want to come back to the United States and U.K., respectively, after they got married to ISIS terrorists in Syria.

A lawyer for one of the women, Hoda Muthana, who wants to come back to the U.S., said she is “willing to pay whatever debts she has to society,” including a lengthy prison term.

“We starved and we literally ate grass,” she was quoted by The Guardian as saying in explaining why she wants to return. “I would tell them please forgive me for being so ignorant, and I was really young and ignorant and I was 19 when I decided to leave,” she said.

"I turned to my religion and went in too hard," said Hoda Muthana, who's now begging to come home.

The Guardian reported that she posted messages on social media calling for terrorist attacks against Americans on holidays.

However, President Donald Trump said she shouldn’t return to the country, and Secretary of State Mike Pompeo agreed.

Hassan Shibly, her family’s lawyer, said “she is accountable for her actions” and she will only “answer to God for her decisions,” Fox News reported.

“People shouldn’t forget that Hoda herself right now and her family are not saying that she should just come back home, that she should get a free pass,” he added. “Everybody acknowledges that what she did was horrible, disgusting, unacceptable, but we also acknowledge that America is great because of our legal system.”

Shamima Begum, 19, said she is “willing to change” to come back to the UK after joining ISIS in 2015, The Guardian reported.

She said on Feb. 22: “I would like them to re-evaluate my case with a bit more mercy in their heart, you know.”