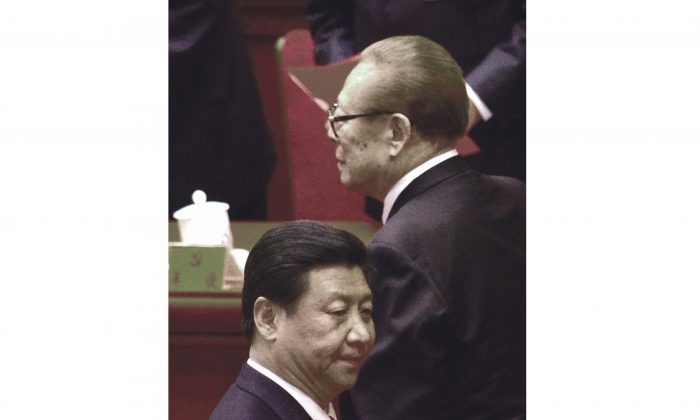 Chinese former president Jiang Zemin(R) walks by Xi Jinping(L) after the closing of the 18th Communist Party Congress at the Great Hall of the People in Beijing on Nov 14, 2012. (Wang Zhao/AFP/Getty Images)
China

Zhang Tianliang
Zhang Tianliang (Shujia Gong), Ph.D. former adjunct professor of George Manson University, is dean of the Department of Liberal Arts and Science at the New York Based Feitian Academy of writes on China's history and politics. He contributes to a variety of publications, including the Arts. He is a popular columnist at the Epoch Times and senior commentator at the New York-based New Tang Dynasty Television and a guest commentator at Voice of America’s Chinese service. He is the author of China's Path to Peaceful Transition.
View profile
Follow
biggersmaller
Print

The open letter listed five counts of Xi’s wrongdoing, including organizational, legal, diplomatic, military, and personal life. It called for “the immediate convening of an emergency meeting of the CPC Central Committee, and an emergency NPC meeting to discuss the above-mentioned five serious wrongdoings, and stripping Xi of all his posts in the Party, military, and government.”

This letter and a previous one, published during the Party’s “Two Sessions” meetings and titled “Loyal Party members call upon Xi to resign” were exactly of the same nature. The first letter advised Xi to resign, and it threatened, “We are concerned that the intensifying power struggle within the Party may threaten the safety of you and your family.”

Xi was visiting the Czech Republic and the United States when the letter demanding that he be fired was leaked, signalling that the gloves are coming off the Jiang Zemin faction of the CCP.

In 2015, Xi originally planned to visit Pakistan and attend the Pakistan National Day military parade on March 23, after the end of the Two Sessions in March. However, Xi did not make the trip, and Pakistan explained vaguely that it was due to security reasons.

In fact, former CCP leader Jiang Zemin and former Chinese Vice President Zeng Qinghong planned to have Xi deposed by launching a coup when Xi was out of his station, using the method used to dethrone former CCP leader Hu Yaobang. The conspiracy was supported by Jiang’s faction and former Standing Committee members Li Lanqing, Li Changchun, and Jia Qinglin.

Zeng used the case of the investigation of Ling Jihua, former head of the United Front Work Department of the Central Committee, to provoke the relations between Xi and Hu Jintao, Xi’s predecessor, in order to get Hu to join his faction. However, he was rebuffed by Hu.

The coup plot was leaked and aborted, and Xi delayed his official trip to Pakistan for a month.

The Jiang faction was misleading the public into dethroning Xi by forgery of public opinion in the name of democracy, which requires the CCP’s 19th General Secretary to be elected by its more than 80 million party members with one vote per member, in order to depose Xi. This media campaign was actually a hoax.

In the history of the CCP’s political campaigns, whether the goal was to depose Hu Yaobang or Zhao Ziyang, it was not done through media campaigns, but done in secret. Only when there was a foregone conclusion would it be ratified by media propaganda.

Now media propaganda was used first. This shows that Jiang and Zeng’s faction has lost its foothold in the Party and within the military, hence losing the power to arrest Xi. It can only use the media to discredit Xi.

This year, Xi went ahead with his overseas visit as scheduled, unlike last year when he postponed his visit to Pakistan. This also shows that Xi has won power.

The argument that the CCP’s 19th General Secretary should be elected by its more than 80 million members with one vote per member is unjustifiable. Not only are there no independent media, independent candidates, or election procedures such as fundraising, debates, or arbitration; but there is also the question of how the Party elections should be held.

If the post of General Secretary were open for election, the CCP would split into several factions. The government would also be elected, and the sins of the CCP would be exposed, disintegrating the CCP.

It would be very strange if the “171 loyal Chinese Communist Party members” were not clear about the above.

If these 171 Chinese Communists were really loyal to their country, they would not have disregarded the Jiang faction’s corruption, its promotion of idolizing Jiang, its persecution of the Falun Gong spiritual practice, or its signing of treaties to sell off China’s territories. This only shows that these 171 members are Jiang’s messengers, and they may even include Jiang himself.

Over the past few months, people arrested by Xi and the Secretary of the Central Commission for Discipline Inspection, Wang Qishan, in Xi’s anti-corruption campaign have not been very high-profile or well-known. However, they were linked to the persecution of Falun Gong that was initiated by the Jiang faction.

Even after Xi came into power, Chen still brought the mother and daughter who were injured in the 2001 Tiananmen self-immolation hoax to New York to generate publicity, in order to continue the campaign of inciting hatred against Falun Gong. The hoax was a widely publicized propaganda stunt aimed at framing Falun Gong to try to justify the persecution.

Chen’s arrest was not only his personal issue. It also signified that Xi was close to exposing Jiang’s most deadly crime, the persecution of Falun Gong.

Xi’s comeback was not only limited to the arrest of Chen. Jiang’s two sons, his secretariat Jia Yanan, and his military adviser Zeng Qinghong, were reported to have been put under monitoring.

The official announcement of these pieces of news implies that Jiang will also soon be put behind bars.

Zhang Tianliang, Ph.D., writes on China’s history and politics. He contributes to a variety of publications, including New York-based New Tang Dynasty Television and Voice of America’s Chinese service.

Zhang Tianliang
Follow
Zhang Tianliang (Shujia Gong), Ph.D. former adjunct professor of George Manson University, is dean of the Department of Liberal Arts and Science at the New York Based Feitian Academy of writes on China's history and politics. He contributes to a variety of publications, including the Arts. He is a popular columnist at the Epoch Times and senior commentator at the New York-based New Tang Dynasty Television and a guest commentator at Voice of America’s Chinese service. He is the author of China's Path to Peaceful Transition.