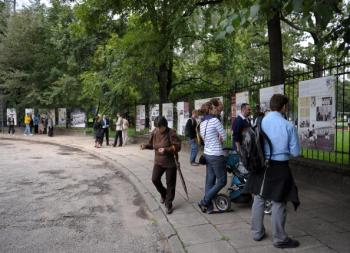 Tom Ozimek
Reporter
biggersmaller
Print
A few days ago a friend invited me to accompany him to the grand opening of  "Poland's first kosher restaurant."

I hesitated. Besides journalistic pursuits I also run a business and my life is tightly wed to a day-planner, which I didn't happen to have on hand: clients, appointments, interviews—I've learnt the hard way to look before I leap and think before I commit to anything. My mind raced over the week's appointments. Tuesday evening? All clear.

Just as I was about to accept, my friend added: "A Jewish friend sent the invitation. I myself am not Jewish."

Indeed, statistically speaking, chances are he wasn't. Out of a total population of almost 40 million, Poland's current Jewish community is estimated at only about 20,000. This is a far cry from the pre-World War II estimates of 3.3 million. What happened to the balance? The Nazi-led Holocaust, which claimed about 3 million Jewish lives, is only part of the answer.

The opening was by invitation only. Security at the restaurant was visible, and visibly professional—more Mossad (Israeli intelligence) than nightclub bouncer, but no frisking. Just a guest list carefully tended to by a throng of gorgeous hostesses who did their best to create a welcoming atmosphere.

Post-war Poland, which became subjugated by Soviet communism for half a century, was not a particularly hospitable place for Jews. The painful memory of the genocide was fresh in everyone’s minds and many Jews elected to emigrate. Anti-Semitic flare-ups among Poles certainly cannot be dismissed—the Kielce pogrom, for instance, which triggered a mass exodus.

On balance, though, it was Soviet communist-driven attitudes and policy towards Jews—a continuation of sorts of tsarist Russia’s anti-Semitic stance—that sustained an atmosphere of hostility and pressured Jews to leave. So many left that when communism was finally overthrown in Poland in 1989, only about 10,000 Jews remained.

All the guests were made to feel special, but there were some truly special guest—high profile politicians, business people, and TV stars, which the paparazzi on hand fawned over and the more inclined  media did interviews with. After being treated to an appetizing array of tasty kosher food (the marketing slogan of the evening was “kosher food is healthy food,” perhaps to attract the non-observant and/or Gentile clientele), followed by a Hasidic lottery and a concert by a Jewish klezmer band, a rabbi gave his blessing to the newly opened locale in a brief but touching ceremony. The talk was of friendship between Poles and Jews, mutual respect, a common future and cultural revival.

If the past is any guide here, then a bright future it might be. That’s because before the tragic chapter in the history of Jews in Poland was written, this region was known as the paradisus Iudaeorum, (Jewish paradise in Latin). It is a well-documented fact that for centuries, since its inception, Poland was a safe haven for Jews facing persecution. So much so that by the middle of the sixteenth century three quarters of all Jews lived in Poland and Warsaw was the city with the biggest Jewish population in the world.

This began to change in 1795, when three European powers, namely the Russian Empire, Austro-Hungary and the Kingdom of Prussia, took over Poland and partitioned it amongst themselves for a period of 123 years. Then came the two World Wars, a period of Soviet communist control and, in 1989, once again a free, sovereign Poland. Perhaps the current revival of Jewish culture in Poland might be thought of as continuity of a time when this land was a safe haven for a people dourly oppressed.

The history of Jews in Poland is a fascinating story because it was here that one of the most dramatic human dramas in history played out, one with an improbably contrastive turn of events. For here is where Jews received the warmest of welcomes and also endured the most heinous of horrors.