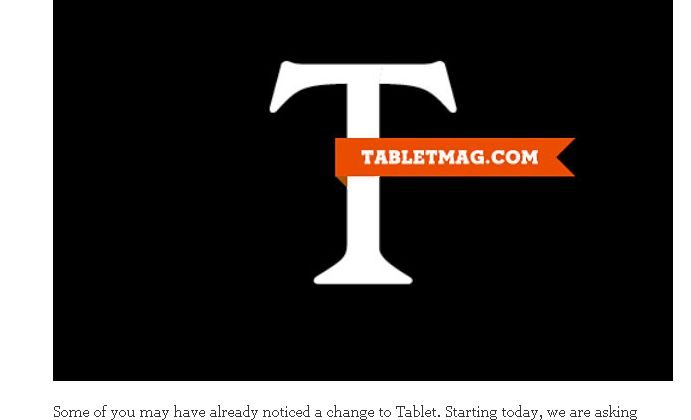 Tablet Magazine announced Monday that it is rolling out a new initiative that will charge customers to comment on its articles.

“Some of you may have already noticed a change to Tablet,” the publication says. “Starting today, we are asking readers to pay to comment on our stories. All of the articles remain entirely free to read. The only thing that requires a donation to access is the talk-back section. The rates are small.”

“Why are we doing this?” the publication asks. “Tablet is committed to bringing you smart, enlightening and entertaining reporting and writing on Jewish life, all free of charge. We take pride in our community of readers, and are thrilled that you choose to engage with us in a way that is both thoughtful and thought-provoking.”

The magazine, which says it has “a new read on Jewish life,” notes that the Internet “poses challenges to civilized and constructive discussion, sometimes allowing destructive—and, often, anonymous—individuals to drag it down with invective (and worse).”

“Instead of shutting off comments altogether (as some outlets are starting to do), we are going to try something else: Ask those of you who’d like to comment on the site to pay a nominal fee—less a paywall than a gesture of your own commitment to the cause of great conversation,” it says.

Tablet didn’t elaborate on the comments that were left.

The company said that readers will be able to “interact with us free of charge via Facebook, Twitter, and our other social media channels, or write to us.”

“The donation rates are small because we are not looking to make money, but instead to try to create a standard of engagement likely to turn off many, if not most, of the worst offenders. All proceeds go to helping us bring you the ambitious journalism that brought you here in the first place,” the company statement adds.