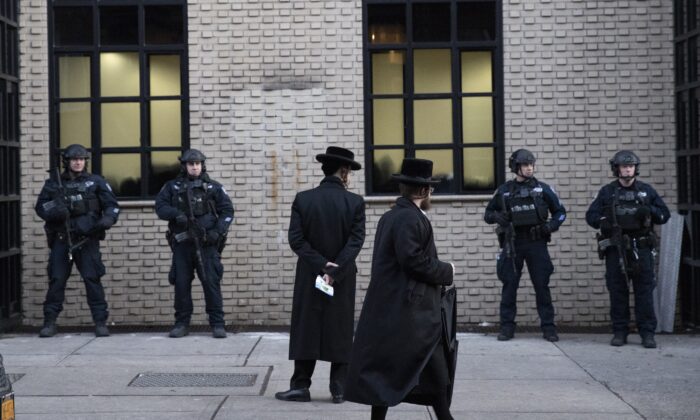 “Orthodox Jews are regularly assaulted, menaced, stabbed, and murdered in increasing numbers. This has been appropriately described as a ‘slow-rolling pogrom,'” reads the letter. “Simply stated, it is no longer safe to be identifiably Orthodox in the State of New York. We cannot shop, walk down a street, send our children to school, or even worship in peace.”

Although the governor has already directed the State Police to increase patrols in Orthodox Jewish neighborhoods across New York, the four officials asked for more security, calling for the National Guard also to be deployed “to visibly patrol and protect Orthodox Jewish neighborhoods.” They also asked him to appoint a special prosecutor to investigate and prosecute current and future anti-Semitic hate crime cases.

This morning @NYSenatorFelder, Assemblyman @SEichenstein, Councilman @ChaimDeutsch and I sent this letter to @NYGovCuomo.
We’re asking for the State Police and NY National Guard to be deployed to our neighborhoods, and for a special prosecutor to prosecute antisemitic violence. pic.twitter.com/EVh8BjwpjT

The letter comes a day after five people were stabbed during a Hanukkah celebration at a rabbi’s house in Monsey on Saturday night. The alleged machete-wielding attacker, 37-year-old Grafton Thomas, was charged five counts of attempted murder and one count of burglary.

A day before the Saturday night stabbing, a woman was arrested after she allegedly punched and slapped three Jewish women in Brooklyn and told police officers it was because they’re Jews. The suspect, 30-year-old Tiffany Harris, was charged with attempted assault and released without bail.

Earlier this month, two gunmen opened fire at a kosher supermarket in Jersey City of the neighboring state of New Jersey. A four-hour standoff and gun battle resulted in the deaths of both attackers, a police officer, and three people who had been inside the supermarket.