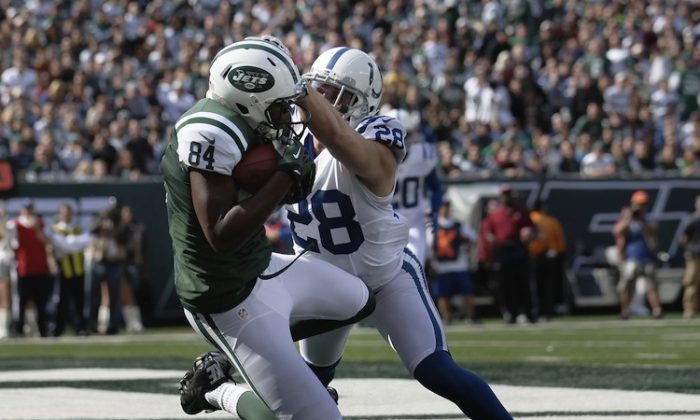 Finally the ground-and-pound has arrived.

In an unfamiliar scene to Jets fans this season, New York’s offense erupted for a season-high five offensive touchdowns Sunday and ran for 252 yards as the Jets (3-3) pounded the visiting Colts (2-3) 35–9. The win snapped a two-game losing streak—both were at home.

“Really a great win for us—we certainly needed one,” said coach Rex Ryan, according to the team’s website. “I love the fact that we were five-for-five in the red zone, which obviously is a big difference in this game, with the Colts being zero-for-two.”

Shonn Greene, who came into the game ranked 42nd out of 46 qualifiers with a 2.9 yards per carry average, went through hole after hole in Indy’s defense and finished with a career-best 161 rushing yards and three touchdowns on 32 carries. Greene had totaled just 217 combined yards in the first five games of the season—this after a concerted offseason effort to focus on the running game.

“Today we were able to pop some and really get Shonn Greene going,” said Rex Ryan.

Even backup running back Joe McKnight (3 carries, 71 yards) got in on the action with his 61-yard run in the third quarter that set up a touchdown—their fourth of the game—putting the Jets up 28 – 9.

While the running game was in rare form, Sanchez complemented it well enough in the air to guide the team down the field. The embattled quarterback broke his streak of four straight games of under 50 percent completion by connecting on 11 of his 18 attempts while throwing a pair of touchdown passes and, perhaps most importantly, didn’t turn the ball over. On the flip side, his 18 attempts netted just 82 yards.

“Whatever we need to win,” said Sanchez, after praising the team’s running game. “Today just happened to be a great day running. If you look at the Buffalo game, we threw the heck out of it and were really successful through the air. If that’s what we need then that’s what we’ve got to do.”

What they also did was convert another successful fake punt courtesy of Sanchez’s backup Tim Tebow. Tebow found linebacker Nick Bellore for 23 yards over the middle on a fourth-and-11 late in the second quarter to extend the drive. Four plays later Sanchez connected with rookie Stephen Hill in the end zone to put the Jets up 21–6. The touchdown drive by the offense was their third in a row after having just three total in their last four games.

Meanwhile on the other side, Ryan’s defense made life uncomfortable for rookie quarterback Andrew Luck. Luck finished 22-for-44 passing with two interceptions though he still passed for 280 yards.

“That young kid at quarterback is going to be a stud,” said Ryan of Luck.

The Jets’ defense got to him though for four sacks on the night with 2012 first-round pick Quinton Coples getting one-and-a-half and 2011 first-rounder Muhammad Wilkerson getting one himself. Seventh-round pick (2012) safety Antiono Allen got a sack in his NFL-debut.

The win means that, despite all their troubles, the Jets are actually tied for first place in the AFC East and have a chance to move on top with a win next Sunday at New England. History though is not on the Jets’ side as the Patriots have beat the Jets each of the previous three regular season games, under Ryan, in Massachusetts. Most likely, the Jets will need more than 82 yards passing from their quarterback to win.