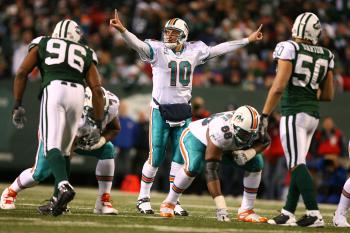 Drew Carlucci
View profile
Follow
biggersmaller
Print
The Jets–Dolphins game had all the makings for an NFL drama—the exiled quarterback returning to his old stomping grounds with a chance to exact revenge; the Hall of Famer on the other side of the field seeking to end his storybook career with another tale of greatness.

By the time the game was finished, it was the Dolphins who emerged victorious and dashed the playoff hopes for the Jets.

Chad Pennington came back to face the Jets with everything on the line. In every sense of the word, he stepped up and brought back a little karmic payback to his former club, who released him in favor of “Broadway Brett” Favre.

Make no mistake about it—this game was huge for Pennington. Not only did he help his club clinch the AFC East, but he proved to the Jets that their decision to release him may not have been the best idea. Pennington went 22–30 for 200 yards and two touchdowns.

After a scoreless first quarter, the Jets were the first to get on the board with a 13-yard touchdown pass from Brett Favre to Laveranues Coles. Failing a two-point conversion, the Jets went up 6–0.

The Dolphins answered back with about two minutes left in the first half, with a 27-yard touchdown pass from Chad Pennington to wide receiver Ted Ginn Jr. That put the Fins up, 7–6.

Seconds before the two-minute warning, disaster struck. Favre went back to work and tried to throw a screen pass to running back Thomas Jones. But Dolphins defensive end Phillip Merling intercepted the pass behind the line of scrimmage at the Jets 25-yard line and ran it in for six. That put Miami ahead 14–6.

On the next drive, Brett Favre lead the Jets down the field and capped it off with a 29-yard completion to Coles deep in Miami territory. With seconds remaining in the half, Jets kicker Jay Feely nailed a 28-yard field goal and inched the Jets closer to the Dolphins, 14–9.

With about five minutes remaining in the third quarter, Jets running back Leon Washington took a handoff and rushed to the right side of the line for a 10-yard touchdown.

The Jets were successful in their two-point conversion as Favre threw a bullet to wideout Jerricho Cotchery, putting the home team ahead 17–14.

It didn’t take long for the Fins to respond.

On a flea flicker, Pennington threw a 44-yard pass down the middle to Ted Ginn Jr. Jets safeties Kerry Rhodes and Ty Law couldn’t make a break on the underthrown ball and Ginn Jr. made the catch, setting up the Dolphins next score, a laser from Pennington to tight-end Anthony Fasano.

The Dolphins regained the lead, 21–17, with about seven minutes left in the third quarter. They would not look back.

But the Jets woes weren’t over. With about five minutes remaining in the game, Favre threw his second interception of the game, again into the arms of Miami corner Andre Goodman—his second pick of the day.
The rest of the fourth quarter would remain scoreless and the Jets season, which started with so much promise, would come crashing to the ground with yet another disappointing thud.

“[This game] was a microcosm of what we’ve been experiencing,” said Jets coach Eric Mangini. “Collectively, we didn’t get done what we needed to get done.

“It’s never one thing when you lose.”

Favre ended the game throwing for 233 yards, completing only 50 percent of his passes for one touchdown and three interceptions.

“We expected to not be done at this point,” said a subdued Favre. “The hardest part is the finality of it, especially when you expect to go on…tough pill to swallow, obviously.”

Favre summed up the situation further: “I had a blast working with these guys. It was a lot of fun.

“I consider this season, when I look back on it, I can honestly say, I’m glad I made the decision to come here and play. I’m not going to hang my head.”

To think the Dolphins (11–5) were 1–15 a year ago and have now won the AFC East Division is incredible. Prior to the season, the Dolphins brought in Bill Parcells to overhaul the team from the front office and establish a winning attitude. Reminiscent of his work with the Jets in 1997, Parcells has done just that.

Throughout this career, the name of Brett Favre was synonymous with late game heroics and unfathomable come-from-behind victories. No one can deny that he was one of the best the game has ever seen. But on this night, it was Pennington who clinched victory and walked off the field with a great comeback of his own.

The New England Patriots (11–5) shut out the Buffalo Bills (7–9) 13–0 in a windstorm but the victory was not good enough to take them to the post-season.

With the Baltimore Ravens (11–5) beating Jacksonville (5–11), Ray Lewis & Co. take the sixth seed and will travel to Miami next weekend.

The Indianapolis Colts (12–4) shut out the top-seeded Tennessee Titans (13–3) in a meaningless game and will travel to face the San Diego Chargers (8–8), back from the dead after their 4–8 start to the season.