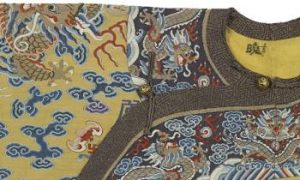 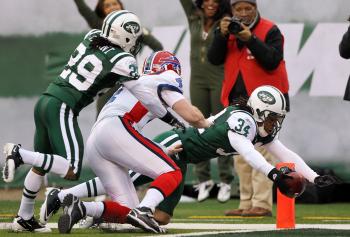 Brian Brohm never had a chance.

Making his first start of the season and second of his career, the Buffalo Bills backup quarterback was constantly harassed by an energized Jets defense that rarely gave him a chance to set his feet for a throw. Brohm threw three interceptions, lost a fumble, and the New York Jets won 38–7.

But due to wins by both the Pittsburgh Steelers and Baltimore Ravens, the Jets finish as the No. 6 seed in the AFC playoffs and will need to win three road games to reach the Super Bowl.

Overall the Bills offense had as many first downs as they had turnovers—six—as they failed to score an offensive touchdown against one of the league’s best defenses in a game where the Jets looked like the confident team that made a deep run in last year’s playoffs.

The Jets offense resembled little of what it had been during the first 15 games of the season. Mark Sanchez started the game, as Rex Ryan promised, and promptly handed the ball off nine straight times before exiting late in the opening quarter having never attempted a pass. The reasoning behind this was to keep Sanchez’s continuity going, his focus sharp, and his shoulder healthy.

Meanwhile, the ball carrier for most of the game was third-string rookie Joe McKnight who shredded one of the NFL’s worst defenses for 158 yards on 32 carries. The rookie running back from USC had had just 31 rushing yards total for the season coming into the game.

As Sanchez exited and Mark Brunell entered, the game plan stayed the same: run the ball. Not until 1:20 was left in the first half did the Jets complete a pass. En route to a 17–0 halftime lead, Brunell found Santonio Holmes in the end zone with 15 seconds remaining in the half.

It was Brunell’s first touchdown pass since 2006, when he was a member of the Washington Redskins. He would throw another one, this time to Braylon Edwards for 52 yards midway through the third quarter to give the Jets a 24–7 lead. This coming after his lone mistake of the day resulted in Bills cornerback Jairus Byrd intercepting a pass and returning it all the way for Buffalo’s lone score.

Meanwhile, defensive end Calvin Pace, among others, most notably Jason Taylor, was having a field day against the Bills suspect offensive line as one of his three pass deflections—he also had an interception—led directly to a touchdown return interception by backup cornerback Marquice Cole.

“He [Taylor] gave consistent pressure. I thought Calvin played an outstanding game,” Ryan said afterward after noting that Taylor’s sack tied him with Lawrence Taylor for eighth all-time in sacks.

For Cole, it was one of two interceptions on the day as the Jets defensive backs benefited greatly from the superior pass rush of the front seven, “Really the whole group did a tremendous job and the guys in the backend, without the two big guns out there [corners Revis and Cromartie], really stepped up,” said Ryan.

Meanwhile, Rex, as usual, was not at a loss for words or confidence when it came to playoff expectations and predictions, “I think we’re gonna win it this year, regardless of who we play we think we’re better than any team out there.

“We gotta go prove it though. We’re confident, there’s no question. We want to win the Super Bowl.”

First though, they will have to travel to Indianapolis to face Peyton Manning and the third-seeded Colts on Saturday night. The 10–6 Colts, who actually have a worse record than the sixth-seeded 11–5 Jets, get the home field advantage by virtue of their AFC South division title.

It’s a home field advantage the wounded Colts will surely need. The Jets will have revenge on their minds as they travel to the place where last season’s playoff run ended.