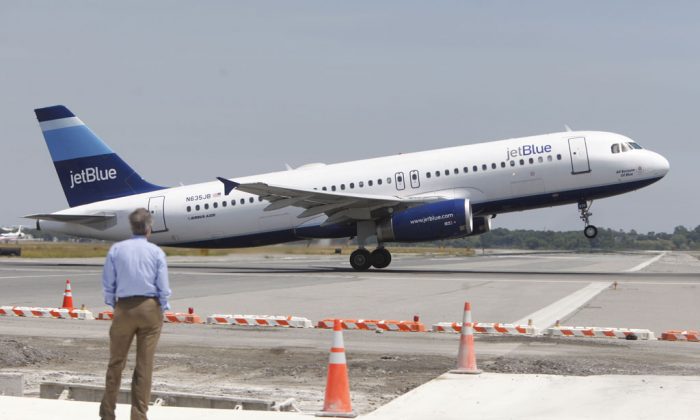 A man watches a JetBlue airplane take off from John F. Kennedy International Airport in New York on June 2, 2010. JetBlue Airways Corp. on Wednesday, Nov. 19, 2014, said that it will create three ticket classes, and only the top two include at least one free checked bag. The company didn't say what the bag fee would be for the cheapest flights. (AP Photo/Seth Wenig)
US

A JetBlue pilot has been charged with drunken flying on a flight from Florida to JFK Airport in New York City.

According to court papers that were released Wednesday, Dennis Thomas Murphy, Jr., was sentenced for a random alcohol test on April 21, 2015, after his plane from Orlando landed with 151 passengers on board.

He blew a 0.11 blood alcohol content on a breathalyzer, the complaint said, reported the New York Daily News. He was given a second test 15 minutes after that and blew a 0.091 BAC.

According to a breath alcohol technician at the scene, Murphy’s “face was red and he was chewing gum rapidly.”

He could face as many as 15 years in prison, if convicted.

He then asserted that his bad results “must have been caused by the gum,” the complaint said, reported ABC News.

His co-pilot also told agents that he saw Murphy “drinking an unknown beverage from a cup before and during” both flights he was on.

To face criminal charges, a pilot has to have a blood alcohol content of 0.10 percent or higher. Separate FAA regulations limit a pilot’s BAC to 0.04.

“During the walk to the onsite testing office at JFK Airport, Murphy’s face was red and he was chewing gum rapidly,” reads the complaint.

He could face as many as 15 years in prison, if convicted.

“JetBlue has a zero tolerance drug and alcohol policy,” it said in a statement. “Following last year’s incident, the crewmember was removed from duty and is no longer employed at JetBlue.”

He had been flying with JetBlue since 2015.