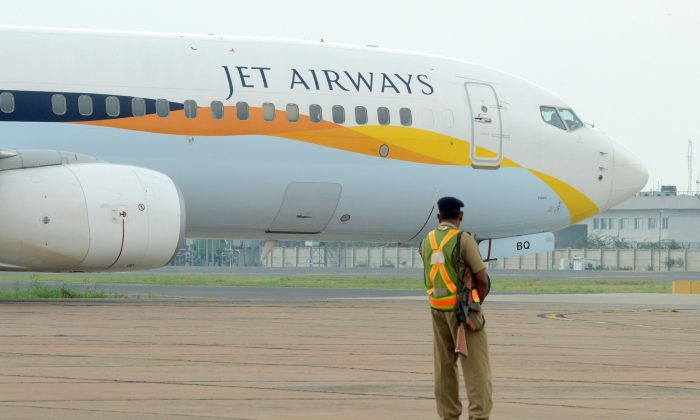 An Indian security official looks on as an aircraft of Jet Airways taxies at Indira Gandhi International Airport in New Delhi on Sept. 12, 2012. (Raveendran/AFP/GettyImages)
India

A Jet Airways hostess has been arrested in India after she tried to smuggle some $500,000 in cash out of the country.

Devshi Kulshreshtha stood by with a somber expression as the authorities opened her luggage and, beneath clothes and cosmetics, discovered tinfoil-covered packages.

Kulshreshtha initially said she only carried $80,000, but it soon became apparent that wasn’t the case.

She used the tin foil wrap to shield the cash from x-ray scanners. It’s not clear if it had the intended effect.

She was arrested by the Indian Directorate of Revenue Intelligence (DRI) officials, who intercepted the flight in New Delhi, before it could take off for Hong Kong as scheduled for 2 a.m. on Monday, Jan. 8.

Kulshreshtha was reportedly working with a man from New Delhi, Amit Malhotra, who smuggled money to be used in gold purchases.

He would collect money from bullion dealers in New Delhi and have Kulshreshtha smuggle it abroad, where it would be used to purchase gold, which was then transported back to India.

Authorities suspect other Jet Airways employees were likely involved too.