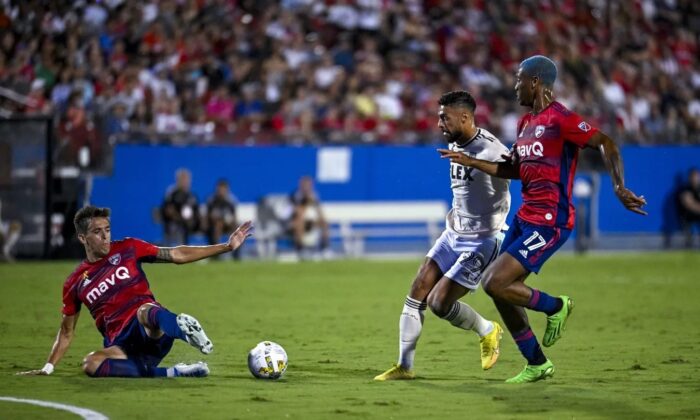 Jesus Ferreira scored twice in a three-minute span late in the second half as FC Dallas roared back to beat short-handed Los Angeles FC 2–1 on Saturday in a key late-season Western Conference match in Frisco, Texas.

Dallas got an early break when LAFC defender Ryan Hollingshead was shown the red card after a dangerous play and a foul in the open field on Paul Arriola. The infraction was initially booked as a yellow card but upgraded to red after VAR decision, forcing the visitors to play the final 77 minutes and six minutes of extra time a man down.

LAFC scored four minutes into first-half added time when Cristian Arango ran under a high, breakaway pass from the midfield by Giorgio Chiellini and lobbed a shot over the head of onrushing Dallas keeper Maarten Paes and into the goal.

Dallas tied the game in bizarre fashion in the 78th minute. LAFC’s Franco Escobar was called for a foul on Arriola just outside the box and went right to referee Jon Freemon to complain. While Escobar was arguing, Arriola quick-started the play and passed to Ferreira, who beat LAFC goalkeeper Maxime Crepeau from an extreme angle.

Ferreira then netted the game-winner in the 81st minute when he scored on a free kick from Crepeau’s left after a foul by Diego Palacios at the edge of the box. His second goal was his 18th of the year and pulled Ferreira into a tie for Dallas’ all-time mark for goals in a single season set in 1999 and also achieved in 2008.

LAFC (19–8–3, 60 points) remained atop the West standings despite losing for the fourth time in their past five matches. Saturday’s defeat dropped LAFC three points behind surging Philadelphia in the race for the Supporters’ Shield.