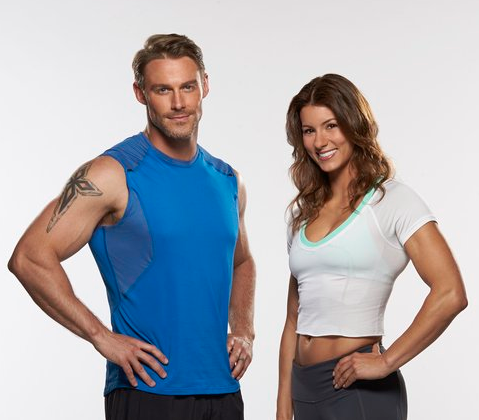 Jennifer Widerstrom and Jessie Pavelka are the two new trainers on NBC’s “The Biggest Loser,” which premieres on Thursday night.

They are coming in to fill in where Jillian Michaels left off.

Widerstrom says that her time on American Gladiators gave her “a taste of the industry.”

It was a blast. We were grown-ups playing games. I would be laughing and taunting (the contestants) sarcastically — I’m from Chicago, I don’t think I was mean. The only time I was mean was when some of the girls would play dirty and try to pull my top down: ‘You want to play dirty? I play dirty too,'” she told the Chicago Tribune.

“It was a persona. It was more of a character. (‘Biggest Loser’) is about me getting to be who I am.”

As for her role on the show, Widerstorm says that she enjoys interacting with people.

“I love people and connecting with them,” Widerstrom said. “I think I’m very good at helping people find their way. I chose fitness and health as a way to do it. This show offers me a platform and place to reach them.”

Pavelka, 33, says on his website that he’s a fitness expert who spends time working in both the United States and United Kingdom.

“For the past 10 years Jessie has been dedicated to helping others to develop practical solutions to lose weight, live well and thrive through exercise and nutrition. Jessie learned much of what he knows about the fitness industry during his time as a professional bodybuilder and fitness model. He has adorned countless magazine covers and features and was even named as Insider’s Hottest Trainer.

“Although Jessie has starred in a number of popular TV shows such as Friday Night Lights and Rita Rocks, his passion and enthusiasm for fitness and weight loss stems from a keen childhood athleticism and has put him on the international radar. His friendly but firm attitude towards participants on Obese: A Year to Save my Life and FAT: The Fight of My Life is both motivational and makes for compulsive viewing.”

Widerstrom, 32, says on her website bio that she’s a leader in the health and fitness community.

“Jennifer encourages others to find their best selves through the principles of healthy nutrition, dynamic physical exertion, mental well being and most importantly, having fun,” it says.

“She enjoys contributing to the well being of others, giving her the opportunity to be a part of something bigger than herself.”