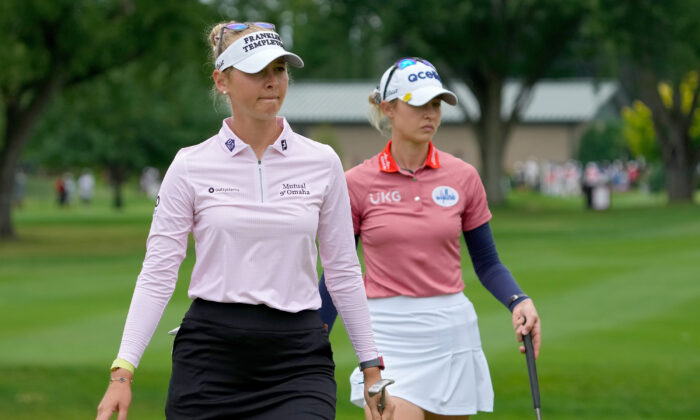 SOTOGRANDE, Spain—Jessica Korda extended her lead to six shots going into the final day of the of the Aramco Team Series in Sotogrande and also won the team event Friday.

Korda shot a 4–under 68 in the second round, a day after carding an 11–under 61 that broke the course record and equaled the lowest round in relation to par ever made on the Ladies European Tour.

She was six shots ahead of Pauline Roussin of France (68), while Nelly Korda–Jessica’s sister–was another shot back in third after a 69.

In the 36-hole team event, the quartet including Jessica Korda, Tereza Melecka, Noora Komulainen and amateur Malcolm Borwick won by one shot after finishing on a total of 33–under over two rounds.

“I think we just really had a good vibe out there,” Korda said. “We tried to keep it as light as possible. It was a lot harder today. The wind was definitely up, so it was a bit tough, but everyone played and contributed. When somebody was out, another person had their back—the beauty of team golf.”

Korda made three eagles Thursday in an 11–under 61 that equaled a Ladies European Tour record and gave her a five-shot lead after the first round of the Aramco Team Series in Sotogrande, Spain.

Korda also added six birdies to go with one bogey on the par-4 eighth to break the course record at La Reserva Club and equal the lowest round in relation to par on the Ladies European Tour.

The American was at 7–under after seven holes following eagles at the par-5 second and sixth holes. She added her third eagle on the 16th, also a par 5.

“I have never made three eagles in a round, so I’m definitely going to remember this one,” Korda said. “For the last month and change, I think I haven’t really been converting any putts and the floodgates opened today.”

Manon De Roey of Belgium and Pia Babnik of Slovenia were tied for second after both shot a 66.

Nelly Korda, Jessica’s sister, was one shot further back in a tie for fourth despite a double-bogey 7 on the sixth.