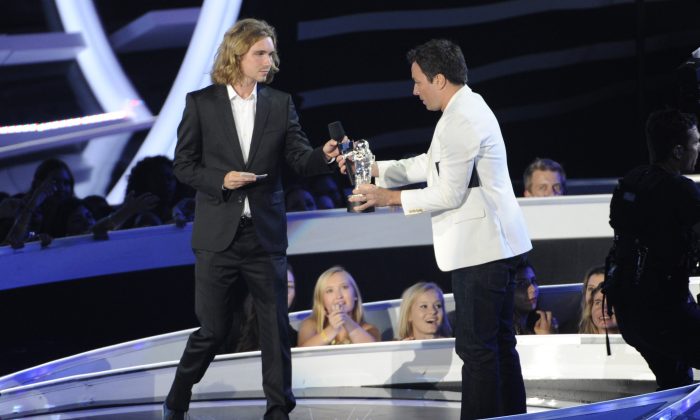 Jesse accepts the award for Video of the Year from Jimmy Fallon on behalf of Miley Cyrus on stage at the MTV Video Music Awards at The Forum on Sunday, Aug. 24, 2014, in Inglewood, Calif. (Photo by Chris Pizzello/Invision/AP)
Entertainment

Jesse Helt has been identified as the man who Miley Cyrus took to the 2014 Video Music Awards over the weekend.

Helt, 22, is originally from Salem in Oregon.

He moved to Los Angeles trying to make it as a model, his mother told the Daily Mail.

“Jesse’s had ups and downs like anybody else… he didn’t wanna give up and run on home to mommy, but only he knows the reasons, that’s for him to say,” she said.

Jesse was catapaulted into the spotlight when popular singer Cyrus took him to the VMAs on Sunday night.

After she won Video of the Year for her song Wrecking Ball, she allowed Jesse to get on stage and read a speech about homeless people, in which he said that he had been homeless.

Jesse’s Model Mayhem page says that he’s “not turning down any work right now and would love to work with all kinds of photographers.”

“If your interested in working with me please shoot me an email,” he added.

“He wanted to be in Los Angeles and he had opportunities and he took them, but you know, he’s had his ups and downs like anybody else. It was his choice, he was always welcome, he could always come back any time. If he needed help, I’d help him, we help one another.”

She said that his appearance at the VMAs will “turn things around for him” and “change his life.”

“He’s a good kid. He was nervous up there on stage, but that’s how it is when you have a passion for something like he does. Somebody’s helping him and he wants to help someone too.” She also complimented Cyrus.

Miley said that she put up Jesse in a hotel for the week before the awards. Jesse shared a photo of the hotel on Facebook.

Jesse once called her and told her he was living homeless. “He called me and he said, ‘Mom, I’m living in a bush,'” she recalled.

She said that Miley and Jesse met when Cyrus visited My Friend’s Place, the Los Angeles center for homeless youth.