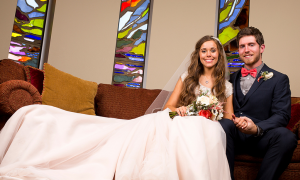 Jessa Duggar has posted her first honeymoon pictures with Ben Seewald, though the location of their marriage celebration remains unclear.

While Ben, 19, has opted to stay off social media during the honeymoon, Jessa, 21, has no such reservations,

The unofficial Duggar Family blog confirmed that the other pictures are from the honeymoon, but it didn’t reveal the location.

“Where do you think the newlyweds are?” the blog teased.

Fans had a wide variety of responses.

“I think they might be in Israel, just because of the olive tree, and the stony wall background,” said one.

“They could be some place cool because they have their jackets on, I am thinking maybe Florida, it can get cool on the beach. Jessa said she was hoping for some place warm, so it is interesting they have to wear their jackets. I don’t think it is really cold, just cool,” said another.

“I believe the honeymoon photo might be Mount of Olives in Jerusalem. Jessa and her family have previously traveled to Isreal … and it seems likely that she wanted to share that experience with Ben,” said another.

“I’ll bet they are right there in Arkansas somewhere secluded and private,” said yet another.

Jessa didn’t caption the first picture but with the second she said “I’m married to the best guy in the whole world!”