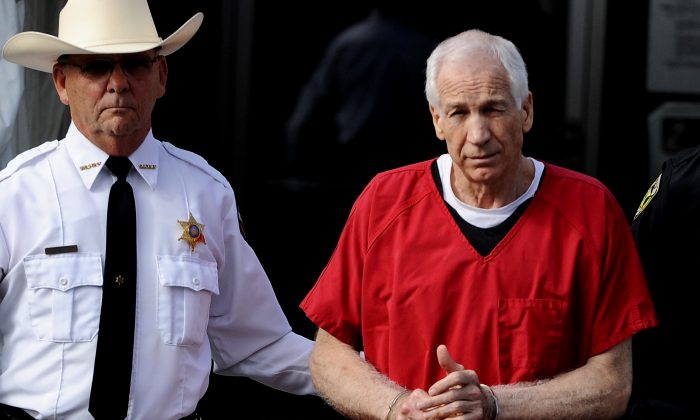 Former Penn State assistant football coach Jerry Sandusky was sentenced to at least 30 years and not more that 60 years in prison for his conviction in June on 45 counts of child sexual abuse. (Patrick Smith/Getty Images)
College Sports

Sandusky appeared at a courthouse in Bellefonte, Pa., Monday to appeal his 2012 conviction on 45 counts of sexual abuse. He is currently serving a sentence of 30–60 years in prison.

At the hearing, Sandusky’s new attorney Al Lindsay asked Judge John Cleland to grant permission for a new hearing to further question some witnesses—including Sandusky’s former lawyers—regarding the investigation and trial, according to a report on ABCnews.com.

Although the 72-year-old Sandusky took no role in the one hour hearing, his legal team read his prepared statement: “I could write a book about what has happened; unmask accusers; demonstrate improprieties; present illegalities; show unfairness; reveal deception , dishonesty, and corruption. Instead, I’m presenting a quick summary, knowing there is much more to the story.”

“I am an innocent man serving what amounts to a life sentence,” the statement said. “People have betrayed, attacked, and vilified family, supporters, and me. To counter their story they must be presented in an adverse manner; people may be exposed in an unfavorable light. Revenge is not my motivation, presenting our side of the story is.”

Judge John Cleland did not make a decision but warned the defense that the there needs to be sufficient reason to continue with a hearing.

“The law is very clear,” Cleland said to the defense, according to The AP. “You have to give me a certification of, if I have a hearing, ‘Judge, this is who I’m going to put on the stand and this is what they’re going to say.'”