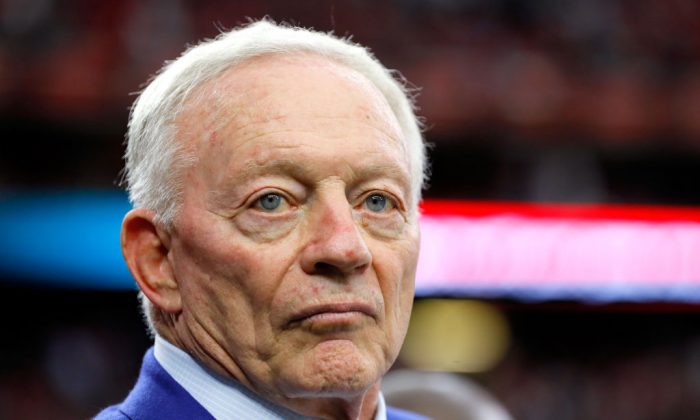 Dallas Cowboys owner Jerry Jones said that he appreciates President Donald Trump’s frequent input on the protests during the national anthem protests that have been taking place in the NFL this season.

“I certainly think that the thing he is addressing is certainly a part of how we want to make our game better,” Jones told CNN this week.

“There’s no question because of our visibility, our substantiveness, that we are looked to for social responsibility as well. This is all part of what I’ve been talking about with the [NFL] commissioner, and certainly I appreciate not only the president, but I want everybody to be a fan of the Dallas Cowboys,” Jones added.

Initially, Jones took a knee with his team during a “Monday Night Football” on Sept. 25 game after Trump slammed the league over the protests.

Jones, however, told media outlets in early October that players who protest will be benched.

According to Fox Sports, Jones said there will be an owners-only meeting to discuss NFL commissioner Roger Goodell’s contract on Dec. 13 in the Dallas area. Jones has been critical of the way the Goodell handled the protests.

”I just want to say we really have had, are having a lot of owner participation,” Jones said, according to Fox. ”It doesn’t mean at all that we’re not really pursuing what we want to get done, and that is have the owners in a very positive way give input and make everyone, including ourselves, accountable.

”I don’t want to be redundant, but the business of standing down there didn’t necessarily mean that you’re not standing up elsewhere.”

The NFL is now thinking about a new idea – keeping teams in the Locker Room during the National Anthem next season. That’s almost as bad as kneeling! When will the highly paid Commissioner finally get tough and smart? This issue is killing your league!…..