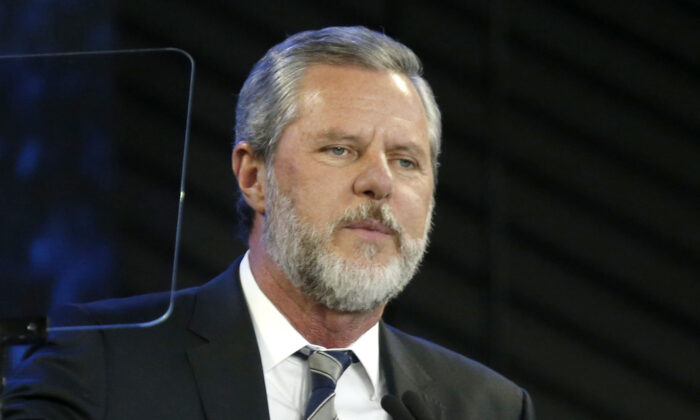 Jerry Falwell Jr., the former president of Liberty University who resigned amid a sex scandal, has dropped a defamation lawsuit against the college, according to reports.

A judge in Lynchburg, Virginia, this week granted a motion from Falwell’s attorneys seeking to dismiss his claim, which he filed against university officials in October, The News & Advance reported Thursday.

“I’ve decided to take a time out from my litigation against Liberty University, but I will continue to keep all options on the table for an appropriate resolution to the matter,” Falwell said in a statement to the outlet.

Falwell resigned from his leadership role at the university this summer after a photograph of him with a woman, who was not his wife, was posted online. In the photo, both had their pants unbuttoned. This was followed by allegations by a pool boy, Giancarlo Granda, that Falwell’s wife had an affair with him and that Falwell watched them during some of their encounters.

While admitting that his wife, Becki Falwell, had a sexual relationship with Granda, Falwell denied any participation, disputed Granda’s characterizations, and accused Granda of trying to blackmail him. Granda has denied having made any extortion attempts.

In his lawsuit against Liberty, Falwell’s lawyers claimed that college officials “accepted lies about Falwell with no investigation and damaged his legacy and reputation following forced resignation,” according to a statement by Quinn Emanuel, the law firm that filed the complaint.

The complaint, which includes claims of defamation and breach of contract, alleges that Liberty University officials accepted the claims against Falwell without investigation in order to force his resignation, and then engaged in a campaign to “tarnish, minimize, and outright destroy the legacy of the Falwell family and Mr. Falwell’s reputation,” the statement said.

Liberty University did not immediately respond to a request for comment from The Epoch Times, but Fox News reported that college authorities expressed pleasure that Falwell had dropped the suit.

“The University’s administration and Board of Trustees are pleased that Falwell has dropped his lawsuit and look forward to pressing onward with the work of Liberty’s President and Chancellor Search Committee to find the new leadership to succeed Falwell,” the statement said, according to the outlet, which also reported that Liberty officials said the decision “was not prompted by any payments, promises, or other consideration” from the college.

Falwell, a lawyer, took the helm of the private Christian university in 2007, succeeding his late father.