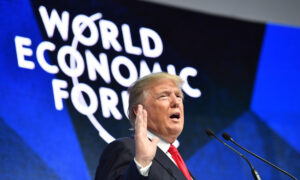 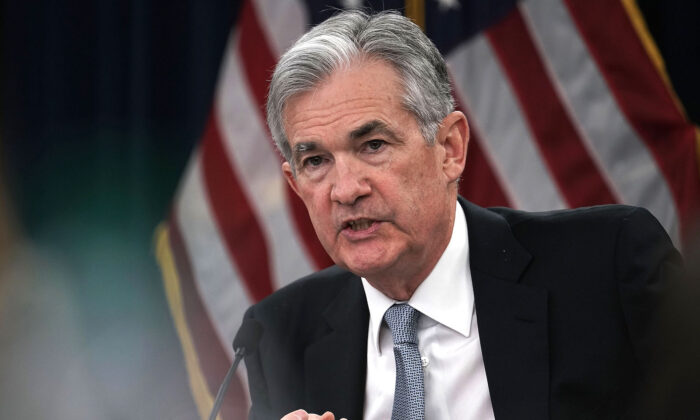 Federal Reserve Chairman Jerome Powell said in prepared remarks on Feb. 11 that persistently low interest rates limit central banks’ scope to respond to an economic downturn, adding that using fiscal policy is key for helping to stabilize the economy when it weakens.

“This low-interest-rate environment may limit the ability of central banks to reduce policy interest rates enough to support the economy during a downturn,” Powell said in testimony prepared for a House Financial Services Committee hearing on Feb. 11.

The head of the nation’s central bank called for restraint in federal spending in times of boom to make room for increased expenditures when the economy finally does contract.

The U.S. economy, which Powell said “appeared resilient to the global headwinds that had intensified last summer,” is in its 11th year of a record-long expansion.

President Donald Trump reacted to Powell’s speech on Twitter, blaming him for the drop in the stock market.

“When Jerome Powell started his testimony today, the Dow was up 125, & heading higher,” Trump wrote.

“As he spoke it drifted steadily downward, as usual, and is now at -15. Germany & other countries get paid to borrow money. We are more prime, but Fed Rate is too high, Dollar tough on exports.”

Trump has repeatedly urged the central bank to cut its benchmark rates to zero or below, in line with other countries like Germany or Japan that continue to get an economic boost from a lower interest rate environment. Trump accused the Fed of putting the U.S. economy at a competitive disadvantage.

Major indices hit record highs during the day but later came down, with the Dow closing flat. It is unclear whether Powell’s comments played a role in the stock market retreat.

Investor’s Business Daily reported that the stocks rolled over from record highs after the Federal Trade Commission announced it was looking into big tech companies’ acquisitions.

The Fed chairman said that while the economy grew at a moderate pace and the labor market strengthened over the second half of last year, inflation remained below the Federal Open Market Committee’s (FOMC) symmetric 2 percent objective.

After the FOMC’s most recent rate-setting meeting in late January, during which members ruled to keep the federal funds rate unchanged, Powell expressed concern about inflation running too cool.

Powell said in his Feb. 11 remarks that over the 12 months through December 2019, total personal consumption expenditures inflation was 1.6 percent, while core inflation, which doesn’t count food and energy prices due to their volatility, also stood at 1.6 percent.

Another inflation gauge the Fed uses to inform its rate-setting decisions is market-based inflation expectations. A chart provided by Nick Reece, senior financial analyst and portfolio manager at Merk Investments, shows that market participants believe average inflation over the next 10 years will hover around 1.7 percent.

“We are in the midst of the longest expansion on record, and despite labor market strength, the Fed has still been unable to hit its inflation target.

“The committee anticipates finishing its review of monetary policy around the middle of this year, which is when we expect the pace of economic growth and job growth to begin slowing.

“Although Chair Powell said that the current stance of monetary policy will likely remain appropriate, the market is pricing almost a 50 percent chance of at least two rate cuts by December.”

Powell also remarked on the risk posed by the coronavirus (COVID-19) outbreak.

“We are closely monitoring the emergence of the coronavirus, which could lead to disruptions in China that spill over to the rest of the global economy,” Powell said.

Tedros Adhanom Ghebreyesus, the director-general of the World Health Organization, called COVID-19 “a grave threat for the rest of the world.”