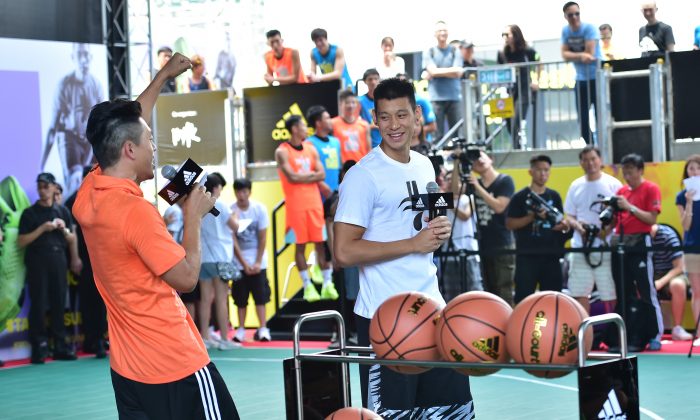 HONG KONG—Basketball superstar Jeremy Lin [Linsanity] flew into Hong Kong on Sunday morning June 28 to add a special touch to the opening of the Adidas Sports Base at the Central Harbour-front event space. The opening of the Sports Base is timed to coincide with the “Boost Your Summer 2015” campaign which will run in Hong Kong for the next six weeks.

The Adidas Sports Base was a hive of activity with lots of fans and some Hong Kong singers and movie stars. Lin was taught a bit of Yoga by singer Alex Lam. Actress Rose Chan taught him some Gong Fu and singer Fiona Sit was given some tips on ball bouncing and handling exercises by Lin. Aspiring basket ball players and current Hong Kong team members were given instruction on special basketball moves to improve their game.

In the afternoon he went to the Chinese University of Hong Kong to give a speech and answer questions. He recounted that in January this year he was left on the “bench” at one of the L A Lakers matches and he said it made him very sad, and made him cry heavily. He thought he had given his best effort but still needed to do better. His contract with L A Lakers is just about to finish so he is now looking for other opportunities.

The Sports Base will host a diversified range of sports until early August, including football, basketball, running, yoga and physical challenges. The “Adidas Cup 2015” is adopting 4-aside football format with boys and girls age categories as well as a men’s open category. The Adidas basketball, “Streetball Challenge 2015” is a 3-aside game aimed at sharpening physical, mental and tactical skills. In addition to the ball games there will be men and women’s training sessions, including yoga for women and repetitive circuit training for men.