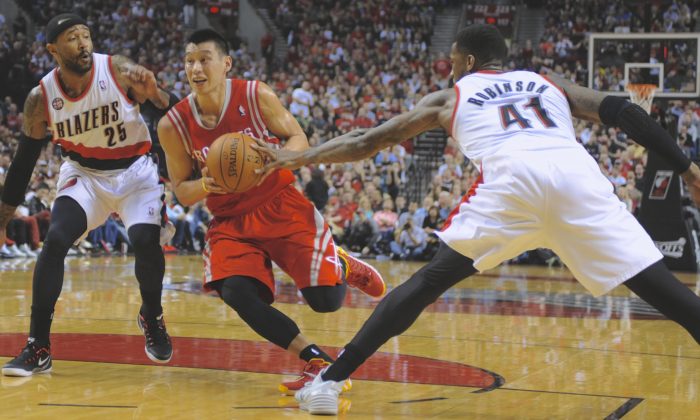 Jeremy Lin is going to get traded by the Houston Rockets but the question is to whom.

UPDATE: Sources told Yahoo that the Lin deal to the Los Angeles Lakers has been done.

Lin needs to go in order to make room for Chris Bosh, and the Rockets have at least several teams they’re discussing trades with.

Now it seems that Lin will go to the Los Angeles Lakers, a new team to rumors surrounding Lin.

“Houston is finalizing a deal to send Jeremy Lin to the Lakers,” reported Adrian Wojnarowski of Yahoo, citing league sources. He added later that the Rockets will also send a first round pick to the Lakers.

It’s unclear what Los Angeles will send back in return.

Marc Stein of ESPN confirmed that the Rockets are trying to trade Lin to the Lakers.

Now that LeBron James has left the Miami Heat, Bosh is expected to sign with the Lakers.

Lin needs to be removed in order to clear enough cap space to sign Bosh to the reported four year, $88 million contract he’s being offered.

The Rockets want to move Lin and finalize the Omer Asik trade so they can sign Bosh and then match the offer sheet for restricted free agent Chandler Parsons.

Without Lin and Asik, the Rockets bench is pretty thin other than Terrance Jones, but the starting five with Bosh, Parsons, Dwight Howard, James Harden, and Patrick Beverly will be pretty strong.