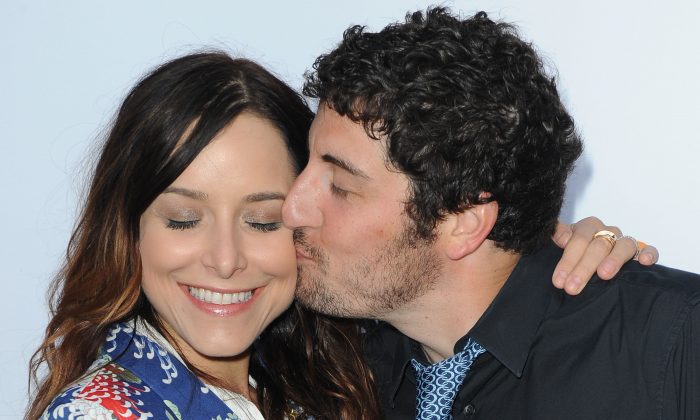 Jason Biggs, at right, and his wife, Jenny Mollen arrive at the season 4 premiere of "Arrested Development" at the TCL Chinese Theatre on Monday, April 29, 2013 in Los Angeles. (Photo by Katy Winn/Invision/AP)
Entertainment

Jenny Mollen, Jason Bigg’s wife, columnist, and actress, and now author has has recently published a book “I Love You Just The Way I Am.”

Mollen is best known for her appearance in the TV series “Angel,” and she also wrote a humorous column for The Smoking Jacket, a website affiliated with Playboy.

“I Love You Just The Way I Am” is a series of essays from Mollen’s life that came out on June 17, 2014, and the actress is currently on a promotional tour for the book.

While traveling Mollen, 35, brings her four-month-old son, Sid. She also travels with her mother who helps take care of Sid, and who has an appearance in her book.

All the while, Biggs is in the midst of filming for the upcoming season of “Orange Is The New Black” where he plays the character Larry Bloom.

In a recent interview with ABC, Mollen said that Biggs is enjoying parenthood and wants to take on more than the father’s responsibilities.

“Jason is a total mom. He was upset that he can’t breastfeed,” Mollen said in the interview.