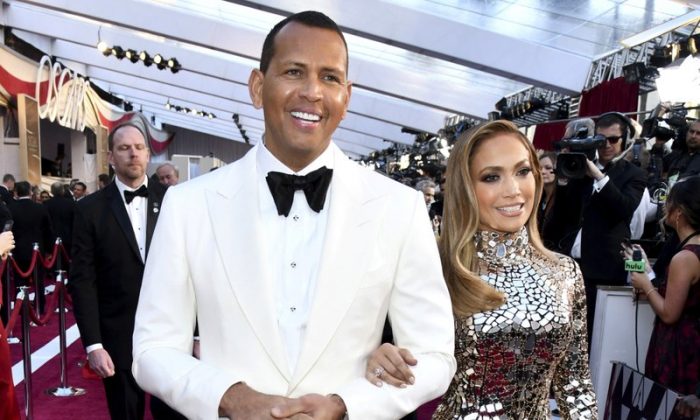 Alex Rodriguez, left, and Jennifer Lopez arrive at the Oscars at the Dolby Theatre in Los Angeles on Feb. 24, 2019. (Charles Sykes/Invision/AP)
By The Associated Press

LOS ANGELES—Jennifer Lopez said yes to Alex Rodriguez’s proposal, and with the rock he presented, who could say no?

The couple posted an Instagram photo of their hands with a massive engagement ring on Lopez’s ring finger. The former Yankees shortstop captioned his photo with “she said yes” and a heart emoji.

The couple have been dating since early 2017 and later that year landed on the cover of Vanity Fair magazine with their celebrity couple nickname, J-Rod.

In January, Rodriguez told The Associated Press that he and Lopez had similar backgrounds and her latest film “Second Act” reflected the ties that drew them together.

“It really resembles a lot of the arc that Jennifer and I lived in our life: Both born in New York, both come from immigrant parents, both have two children, both Latino Americano—her, from Puerto Rico, me, from Dominican Republic. We’ve been through our ups and downs but here we are in our 40s and trying to live the best lives possible and, at the same time, give back and pay it forward,” Rodriguez said.

Lopez, who began her career as a dancer and singer, is also a film and television actress and producer. She was a judge on “American Idol,” appeared on TV police drama “Shades of Blue,” and is the producer of shows including “World of Dance.”

In Rodriguez’s 22-year career, he has hit 696 home runs, placing him fourth on Major League Baseball’s all-time home run list. He retired in 2016.

With ‘Second Act,’ Jennifer Lopez Makes Her Own Opportunity

Jennifer Lopez learned a long time ago that in the entertainment business, you can’t just sit around waiting for opportunities—you have to make them for yourself. It’s the simple reason “Second Act,” her first film in three years and her long-awaited return to the glossy, modern-day fairy tale, exists.

“I’m quite particular,” Lopez said on a recent afternoon in Los Angeles. “I’ve been offered a couple of movies over the past couple of years but unless it’s the right thing and I get the right types of opportunities, I’d rather create them. That’s mine and Elaine’s mantra. We don’t force things, but we don’t wait around either … If no one is giving us the stories that we want to tell, then we’ll create them ourselves.”

Be the person you want to be. Bring home #SecondAct on Digital HD March 12. Pre-order now: https://t.co/xt6gXLUrcd pic.twitter.com/TNuEgAcG1d

Elaine Goldsmith-Thomas is Lopez’s longtime friend and producing partner. The pair have worked together on projects like “The Boy Next Door” and “Shades of Blue.” ″Second Act,” which hit theaters nationwide in December, was Elaine’s idea.

She thought that Lopez would be the right woman to play the 40-year-old big box store worker with business savvy but no degree who gets a chance to prove herself to Madison Avenue’s elite. A little bit “Working Girl,” a little bit “It’s A Wonderful Life,” it was right up Lopez’s alley.

“We’re stuck on these movies because we know, we grew up on them and we know. They’re necessary. People need inspiration. They need to believe in a fairy tale,” Lopez said. “I think that is the evolution of the romantic comedy. It’s not so much about falling in love with Prince Charming, it’s about falling in love with yourself and your life and realizing that you have to be the love of your life.”

She hopes that people find inspiration and hope in “Second Act.”