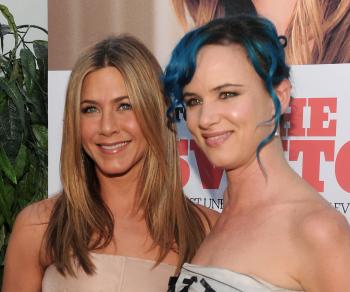 Aniston looked stunning in a two-tone Lanvin dress while Lewis sported a cobalt blue hairdo, reported Marie Claire. Lewis revealed they have become good friends while swapping stories, as both had relationships with Brad Pitt.

The movie is a comedy about a woman who decides to have a child using artificial insemination.

“It’s a subject that’s so unique and hasn’t really been discussed in movies. I think it’s topical and makes it interesting,” said the 41-year-old actress in a BBC TV interview.

The Friends star, who has never been pregnant in real life, joked about playing yet another role as an expectant mother.