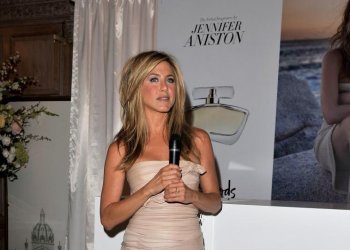 Jennifer Aniston attends photocall at the launch of her debut fragrance at Harrods on July 21, 2010 in London, England. (Gareth Cattermole/Getty Images)
Entertainment

The Friends star posed in several of Streisand’s iconic images, such as those in Funny Girl and What’s Up, Doc?. She displayed outfits and jewelries from brands including Gianfranco Ferré, Chopard, Donna Karan New York, Harry Winston, Neiman Marcus, and Louis Vuitton.

Idolizing the 68-year-old star since childhood, Aniston, 41, often sings her songs in the shower, she told the magazine.

"I've loved her since I was a kid, and all of a sudden there she is, and she's just like someone you've always known," Aniston said.

"You know when you meet people you idolize and then you walk away from the conversation thinking, 'Well, that was a disappointment; they were kinder and more fabulous in my mind?’ Well, she was wonderful, and you could talk to her about anything. So, I happened to be talking to her and Jim [Streisand's husband, James Brolin] when it struck midnight. They said, 'Excuse us,' kissed each other, and then, very politely, kissed me."