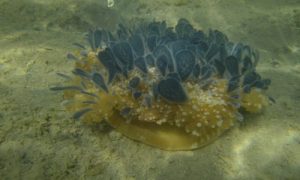 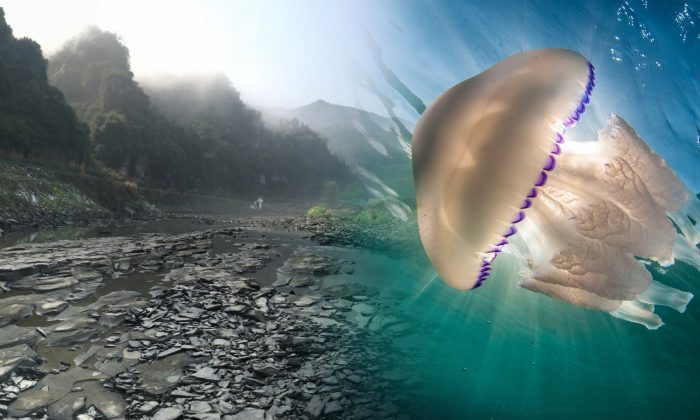 A stock photo of a jellyfish (Illustration - Shutterstock)
UK

Jellyfish as Big as a Human Spotted Off English Coast

A large jellyfish the size of a human was photographed and filmed off the southwestern coast of England near Cornwall.

The large cnidarian was identified as a type of barrel jellyfish, CNN reported.

“What an unforgettable experience,” biologist Lizzie Daly told the network. “I know barrel jellyfish get really big in size but I have never seen anything like it before!”

“It was the best thing I’ve ever done,” she said of the encounter. Daly was exploring the waters for her campaign, “Wild Ocean Week,” and added that the jellyfish was as large as she was.

“We had been diving for about half an hour, and out of the murky water was this single enormous jellyfish,” she told USA Today. “It was very humbling to be swimming alongside of it,” she said, adding that the animal isn’t a threat to humans and has a mild sting.

Woah!!!!! We went diving in Falmouth yesterday to finish off #WildOceanWeek and came across this GIANT barrel jellyfish! 😱 What a way to finish off this marine wildlife adventure! 💙 pic.twitter.com/NNwDelfWyV

Daly noted, “It was just a pretty majestic creature.”

Barrel jellyfish grow to about 3 feet and weigh as much as 75 pounds, according to the Dorset Wildlife Trust.

The Guardian: “Jellyfish as big as a human seen off Cornwall coast – video https://t.co/yezu5UkFss pic.twitter.com/YZ1GwjA74R

“These large jellyfish swarm in warmer coastal waters in late Spring and often wash up on our beaches in May or June, sometimes in their hundreds. They can grow to the size of dustbin lids – giving them their other common name: dustbin-lid jellyfish! They are attracted inshore by plankton blooms which provide a plentiful supply of food. They have 8 arms, each frilly in appearance. These frills actually contain their small stinging tentacles which surround hundreds of little mouths,” the wildlife website says. “The sting of the barrel jellyfish is not normally harmful to humans, though if you find one on the beach it’s best not to handle it as they can still sting when dead.”

There has been an increase in reports of sea lice, or jellyfish larvae, biting swimmers in Virginia Beach.

Lifeguards reported to WTKR, a local news outlet, that sea lice are on the rise at the beach, and people have noticed rashes and bumps on their skin.

“It felt like sand on your clothes and then it started to feel like things were biting you,” Cade Welsh, a Virginia Beach local, told the station.

He continued: “If you, like, scratch, it will feel like sand and if you look, you’ll see a clear thing with blue eyes.”

“They don’t mean to, but they start to inject a little toxin, which causes a rash in the area,” Gill told the outlet. “It’s stuck in your suit and you can’t really see it very well. You need to get that suit off and rinsed and washed out and cleared of all the larvae, and you need to get washed out of all the larvae in any of the hair areas—but that’s hard to do when you’re on a public beach.”

Swimmers can’t spot the little jellyfish larvae, as they’re microscopic. They can sting just like a fully grown jellyfish, leaving a mark. The rash they cause is called seabather’s eruption, experts have told CNN in a 2016 report.

Parks and Recreation officials for Palm Beach County added to ABC News at the time: “Some people do experience a prickling sensation while in the water, though itching usually starts several hours after being in the water and lasts two to four days but can last as long as two weeks.”

WebMD says that people definitely should not go in a pool or shower with their bathing suit still on.

“Fresh water will make the jellyfish start to sting again and may worsen your pain. Instead, take off your bathing suit as soon as you can and rinse your body. Wash your suit in hot water and toss it into the dryer to make sure all the larvae are gone. If you had a severe rash, you may even want to get rid of the suit,” the website says.