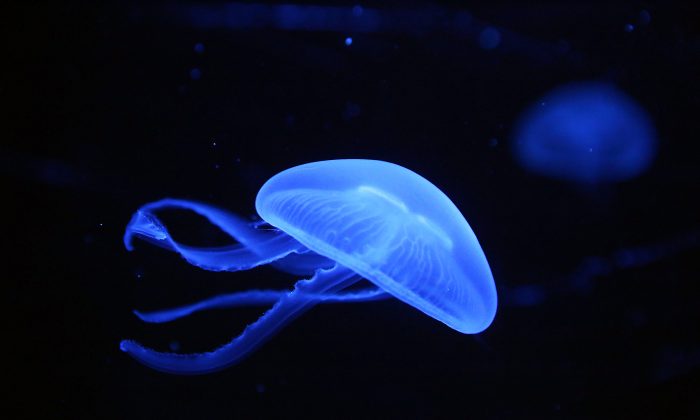 Jellyfish swim in an aquarium at the Scientific Center of Kuwait on November 24, 2013 in Kuwait City. (Yasser La-Zayyat/AFP/Getty Images)
Tech

A “jellyfish aircraft drone” has been conceived and is inspired how a jellyfish swims through the water.

Scientists have built the drone, which can hover in the air and maintain stability. The aircraft weighs only 2.1 grams, reported the BBC.

In the past, researchers have attempted to make drones that fly stably by having them mimic the wings of insects.

“In the future, small-scale flapping-wing aircraft may be used in applications ranging from surveillance and reconnaissance missions to traffic and air quality monitoring,” the researchers wrote in the Interface journal.

The “jellyfish” device was a step in the right direction.

“Depending on the application, active control over an intrinsically unstable design may be more desirable than passive stability,” wrote Leif Ristroph and Stephen Childress from New York University, who carried out the research.

The materials used to construct the tiny aircraft were bought over-the-counter–nothing high-tech, they said.

“We were inspired in part by videos from the 1900s, in the early experimental days of flying. They were very creative in those days, they had lots of very good ideas, but also some bad ones,” Ristroph said, according to CrazyEngineers.

He said that inventors in the turn of the last century had some great ideas but also some poor ones.