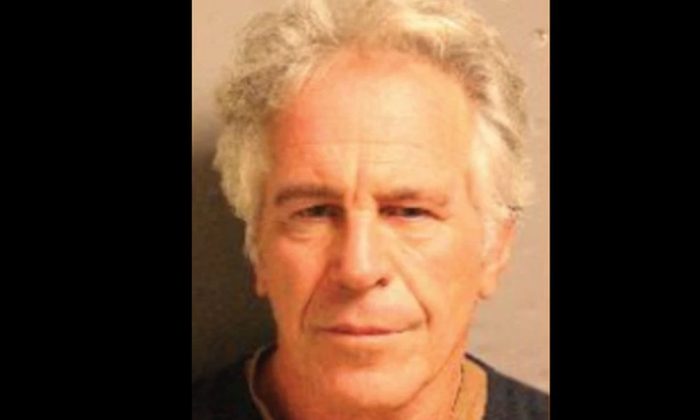 Jeffrey Epstein in his final mugshot.(Department of Justice)
US News

Prescription drugs, an electrical cord, sheets, and a note were reportedly discovered inside convicted sex offender and financier Jeffrey Epstein’s cell after he killed himself.

The New York Medical Examiner ruled Epstein’s death in August was a suicide by hanging, although another medical expert has said that his neck bones showed signs of trauma that are not normally associated with suicidal hangings.

The new details about what was found in his jail cell at the Metropolitan Correctional Center in Manhattan will be included in a “60 Minutes” report on Sunday night.

The report said that his cell wasn’t sparse, and there were multiple sheets, lots of bedding, and an electrical cord—despite Epstein having been put on suicide watch weeks before. A note was also discovered.

A video that might have seen Epstein’s cell door “was corrupted,” a CBS journalist said, adding that it’s not clear what happened.

The death of Epstein, who was connected to wealthy and powerful individuals, left a number of unanswered questions.

Dr. Michael Baden, a forensic pathologist who also investigated Epstein’s death, told “60 Minutes” that Epstein died at around 4:30 a.m., and noted that guards transferred him to the hospital hours later. He said that is unusual because “guards should not move a dead body” in jail as it’s part of a crime scene.

Baden previously said that there were questions about Epstein’s neck injury.

“Did the injuries happen a week before or at the time of the incident? We have to look at the microscopic slides to see when the injuries occurred,” Dr. Baden told Fox News. “The brother requested this information three months ago and he still has not gotten it.”

The two prison guards who were supposed to check in on Epstein have been charged with conspiracy and falsifying records.

Guards Tova Noel, 31, and Michael Thomas, 41, have pleaded not guilty in the case.

“Based on our view of the case, I believe there are outside circumstances that are impacting this prosecution,” Noel’s attorney, Jason Foy, said in court late last year, according to the New York Post.

“One of the issues here is going to be conditions, supervisions, and the policies updated and advanced by the Bureau of Prisons,” Figgins said.

When asked by the Post about whether his client is a scapegoat, Figgins said, “Absolutely.”

Court documents said that the two took naps and browsed the Internet instead of checking on Epstein’s cell. He was just several feet away from them, the Post reported.