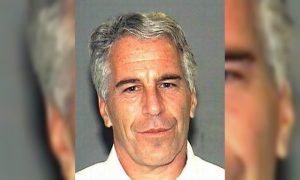 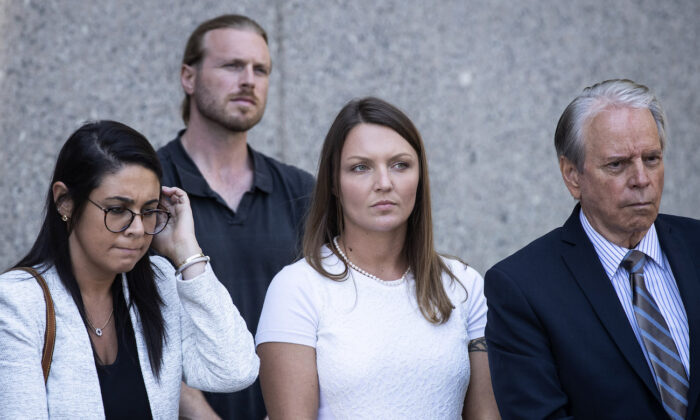 Courtney Wild (C), alleged victim of Jeffrey Epstein, looks on as her lawyers speak to the press at federal court following a bail hearing for Jeffrey Epstein, in New York City on July 15, 2019. (Drew Angerer/Getty Images)
Crime and Incidents

Alleged victims of deceased convicted sex-trafficker Jeffrey Epstein will have a chance to challenge a federal non-prosecution agreement—often referred to as Epstein’s “sweetheart” plea deal, which was signed more than a decade ago.

Courtney Wild, an Epstein accuser originally known as Jane Doe 1, as well as another plaintiff known as Jane Doe 2, had filed an original lawsuit in 2008 to overturn the non-prosecution agreement. They argued that Department of Justice (DOJ) prosecutors had violated their rights under the 2004 Crime Victims’ Rights Act (CRVA) by sealing the deal without consulting with or informing the alleged victims.

The Atlanta-based U.S. Court of Appeals for the 11th Circuit ruled on Aug. 7 (pdf) that the alleged victims will have their case reheard en banc—a legal term to mean that a case will be heard before the entire bench of a court, rather than just by a panel of judges selected from the bench. The decision vacates a previous 11th Circuit three-judge panel’s 2–1 ruling in April that had rejected Wild’s argument.

“I had confidence this day would come,” Wild said in a statement to media outlets. “We have fought for 12 years, and as I’ve said before, no matter how many obstacles pile up, we will never give up fighting for what is right.”

The non-prosecution agreement was signed in 2007 with the DOJ through the Southern District of Florida in Miami. Former Secretary of Labor Alex Acosta was the U.S. Attorney at the time. Acosta resigned as labor secretary after Epstein was arrested under separate new charges in July 2019.

The plea deal relates to when Epstein was previously charged in 2007 with operating an international child sex ring involving at least 30 underage girls, which Wild was allegedly a part of, at Epstein’s Palm Beach mansion and Little St. James Island—a 72-acre private island estate in the Caribbean.

The plea deal, as shown attached in a recent federal court filing (pdf), involved Epstein pleading guilty in 2008 in state court, rather than federal court, to just two felony counts of soliciting an underage prostitute. Epstein had to register as a sex offender, and also provided undisclosed information to authorities under the deal.

In exchange, Epstein avoided serious time behind bars, serving just under 13 months in a private section of the Palm Beach County jail in Florida. During that time, he was afforded a work-release program that allowed him to leave the jail for 12 hours each day, six days a week, and work unsupervised at his downtown West Palm Beach office. Epstein’s 13-month sentence is believed to be one of the most lenient in U.S. history for a sex offender.

Epstein’s lawyers had argued that according to the plea deal, he was immune to any new federal charges for crimes committed during the time period of around 2001 through around September 2007.

Epstein died at age 66 in August 2019 in a New York jail, and was determined to have committed suicide by the New York City Medical Examiner’s Office. His death triggered multiple investigations.

Ghislaine Maxwell, Epstein’s longtime associate, now faces charges of helping Epstein recruit and eventually abuse girls from 1994 to 1997, and is jailed in New York. If convicted, she faces up to 35 years in prison.

U.S. District Judge Kenneth Marra in February 2019 ruled (pdf) that prosecutors of the U.S. Attorney’s Office for the Southern District of Florida, including Acosta, broke the law (the CRVA) when they didn’t inform the alleged 30 victims about the plea deal in 2007.

In September 2019, Marra ruled to close the case brought by Wild and Jane Doe 2, thereby not scrapping the 2007 plea deal.

He denied almost every request for relief, including ruling that they weren’t owed any money damages from the U.S. government, and refused to fulfill their demand that the government turn over FBI records linked to its investigation of Epstein. He also said that Epstein’s death in August 2019 made the case moot.

In an opinion, Marra wrote that the alleged victims’ request for restitution is “essentially a request for money damages from the government, which is not allowed under the CVRA.”

In a challenge to Marra’s decision, Wild filed a petition with the appeals court in October 2019, asking the court to order Marra to provide relief to the alleged sex victims. In April, a three-judge panel of the 11th Circuit Court ruled (pdf) that the CRVA doesn’t protect alleged victims before formal charges are filed. At the time the plea deal was struck, no charges had been filed.

Sen. Dianne Feinstein (D-Calif.) and former Sens. Orin Hatch (R-Utah) and Jon Kyl (R-Ariz.), who drafted and co-sponsored the CRVA, had filed an amicus brief (pdf) in May in support of Wild’s petition for rehearing en banc.

“This is an important ruling for crime victims, not just for Epstein’s victims but all victims of federal crimes,” Wild’s lawyers, Paul Cassell and Brad Edwards, told the Miami Herald on Aug. 7. “We look forward to arguing before the full 11th Circuit that [the] ‘secret’ plea deal violates the Crime Victims’ Rights Act and that this particular deal should be rescinded.”