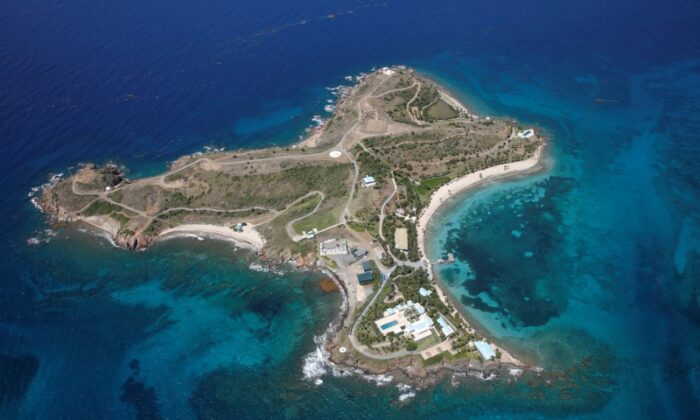 Little St. James Island, one of the properties owned by Jeffrey Epstein, is seen in an aerial view near Charlotte Amalie, St. Thomas, U.S. Virgin Islands, on July 21, 2019. (Marco Bello/Reuters)
US News

The estate of Jeffrey Epstein, the late financier who allegedly led a child sex trafficking ring, has been sued by the government of the U.S. Virgin Islands, which claims the right to confiscate tens of millions of dollars in assets that Epstein is said to have used in committing dozens of crimes, including rape and human trafficking of minors.

Epstein maintained an electronic database of his victims and his criminal enterprise operated from 2001 through 2018, the Jan. 15 complaint alleges.

Epstein was arrested in July 2019 on charges of sex trafficking minors. He died in his jail cell in New York City on Aug. 10.

The 49-page complaint details how Epstein bought his private island of Little St. James in 1998 and allegedly used it “as the perfect hideaway and haven for trafficking young women and underage girls for sexual servitude, child abuse, and sexual assault.”

The secluded island not only served to conceal the crimes, but also to keep the victims captive, the suit alleges, since it can only be accessed by helicopter or boat.

Epstein in January 2016 bought the adjacent island, Great St. James, for over $20 million “to further shield his conduct,” the suit says.

The purchase “demonstrates his intent to expand his illegal operation in the Virgin Islands for years to come,” the government argued, also noting that it “created additional barriers to prevent those held involuntarily on Little St. James from escaping or obtaining help from others.”

Epstein’s estate, managed by his long-time lawyers, Darren Indyke and Richard Kahn, valued the two islands at $86 million. The suit lays claim to the islands and other assets of Epstein’s used to run his alleged criminal enterprise. That would likely include his private planes and helicopters and his boat.

The estate valued Epstein’s total assets at nearly $580 million, excluding his “arts, antiques, and other valuables,” which haven’t been valued yet, the suit says.

Two days before his death, Epstein changed the terms of his 1953 trust and revised his last will to transfer all of his property to the trust run by the two lawyers.

Database, Escape Attempts, and Girls as Young as 11

The government describes incidents and details that illustrate the scope of Epstein’s alleged crimes.

“Upon information and belief, the Epstein Enterprise kept a computerized list of underage girls who were in or proximate to the Virgin Islands, and able to be transported to Epstein’s residence at Little St. James in the Virgin Islands,” it says.

One time, a “15 year old victim was forced into sexual acts with Epstein and others and then attempted to escape by swimming off Little St. James island,” the suit says. “Epstein and others organized a search party that located her and kept her captive by, among other things, confiscating her passport.”

“Another victim, who was first engaged in providing massages to Epstein, was then forced to perform sexual acts at Little St. James in the Virgin Islands. When she attempted to escape from the ‘private island,’ Epstein and a search party found her, returned her to his house, and suggested physical restraint or harm if she failed to cooperate.”

As recently as 2018, “air traffic controllers and other airport personnel reported seeing Epstein leave his plane with young girls some of whom appeared to be between the age of 11 and 18 years,” the suit says.

The trafficking ring “facilitated and participated in the sexual molestation and exploitation of numerous girls between the age of 12 and 17 years old,” the government alleges.

The suit used the phrase “upon information and belief” 16 times, suggesting it partly relies on unverified information.

Epstein’s death was ruled a suicide by the New York medical examiner, who said he had hanged himself with a sheet from his bunk bed.

Famed pathologist Dr. Michael Baden, who was hired by Epstein’s brother, Mark Epstein, to observe the autopsy, told Fox News in October that he believes the physical evidence suggests Epstein didn’t take his own life.

He said Epstein’s injuries were “more consistent with ligature homicidal strangulation” than suicide.

Recently, prosecutors Maurene Comey and Jason Swergold wrote that the video that was captured from outside Epstein’s cell “no longer exists,” blaming a mix-up when they asked the jail to preserve the footage.

Update: The article was updated to reflect that the lawsuit alleges Jeffrey Epstein operated his criminal enterprise through 2018.