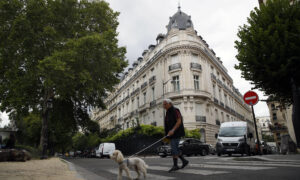 The federal government alleges Epstein anchored a criminal enterprise, which is referred in court documents as the “Epstein Enterprise.”

“The victims were coerced into to [sic] participating in these arranged marriages, and understood that there would be consequences, including serious reputational and bodily harm, if they refused to enter a marriage or attempted to end it.”

George also alleged that the primary purpose of arranging the marriages was so the women “could continue to be available to Epstein for his abuse—a doubly-deep assault on their will and dignity.”

The filing, an amended lawsuit against Epstein’s estate, adds Darren Indyke and Richard Kahn, co-executors of the estate, as defendants.

The men helped Epstein coerce sex trafficking victims, authorities now allege. Kahn is accused of providing a letter of reference for at least one immigration application and tax services to the spouses, while Indyke allegedly paid the immigration lawyer who applied for citizenship for the women and threatened at least one who indicated that she would seek a divorce.

“They used their professional skills and authority to carry out this abhorrent scheme,” the filing states, referring to the pair as “the indispensable captains of Epstein’s criminal enterprise, roles for which they were richly rewarded.”

Epstein, who died in prison in 2019 while awaiting trial on sex trafficking charges and other counts, owned multiple homes, including abodes in New York, Florida, and New Mexico. He also owned an entire island in the U.S. Virgin Islands, giving George jurisdiction over his estate.

George said the estate continues to refuse to cooperate with discovery, documents, and information, but she obtained information elsewhere about the alleged crimes that Epstein and his accused co-conspirators committed. She first sued the estate last year.

In a statement to news outlets, a lawyer on behalf of the estate said Indyke and Kahn “categorically reject the allegations of misconduct made for the first time today by the Attorney General of the Virgin Islands regarding their purported roles in the so-called ‘Epstein Enterprise.'”

“The facts are clear: neither Mr. Indyke nor Mr. Kahn had any involvement in any misconduct by Mr. Epstein of any kind, at any time,” the lawyer added.

In a separate but related case, George last week asked a judge to immediately freeze all of the assets and cash on hand for Epstein’s estate, arguing the estate breached its commitments to fund a compensation program for the deceased’s victims.

The estate “has failed to make its currently-owed payment to maintain funding of the Program, or even to commit to the timing of its next payment,” a court document stated. “The Estate’s failure to make its required payment without any prior warning seems designed to precipitate a crisis, which it has inasmuch as the Program’s Administrator, Jordana Feldman, has announced that she is suspending claim awards from the Program.”

In a response on behalf of the co-executors, lawyers said the compensation program is continuing as before except with what it described as a “temporary ‘hold’ on issuing compensation determination offers.”

The estate has already funded the program with over $87 million, it said. Out of that, nearly $58 million has been paid out to claimants.

Indyke and Kahn are focusing on liquidating the estate’s assets, the filing said, as lawyers argued the court shouldn’t rule in favor of George’s motion.