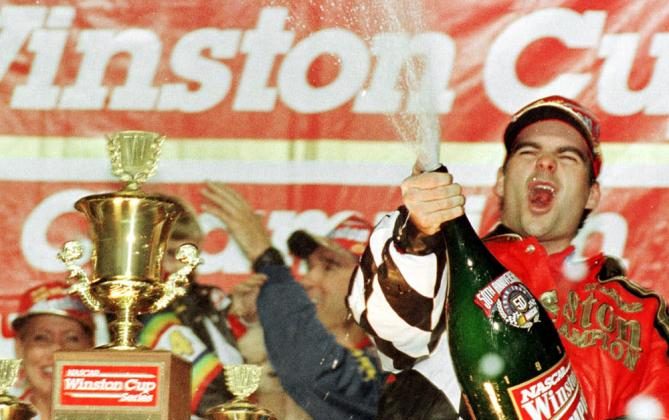 Jeff Gordon Having Another Championship-Caliber Season

If you haven’t heard by now, Dale Earnhardt Jr. is in the midst of his best season in a decade, furthered by his win Sunday at Pocono Raceway.

But after 21 races, he’s still not the driver having the best season.

That would be points leader Jeff Gordon.

You’re forgiven if you’ve forgotten the former, as the 43-year-old driver hasn’t won a championship since 2001.

While having to answer retirement questions at every press conference recently, Gordon is giving new meaning to the word consistency in his 22nd season in NASCAR’s top series.

Hendrick Motorsports’ longest-tenured driver has sat atop the points standings for 14 of the last 15 weeks, a stretch dating back to the seventh race of the season at Texas Motor Speedway, with the only break coming after a 15th place finish in the June race at Dover.

Gordon currently holds a 17-point lead over Earnhardt going into Sunday’s race at Watkins Glen International, a track where he has four career wins, the last coming in 2001.

How does Gordon’s 2014 season stack up against his four championship years after 21 races?

Let’s start with why Gordon is leading the standings currently.

While Earnhardt, Jimmie Johnson and Brad Keselowski are tied with three wins apiece to Gordon’s two, Gordon has one thing the others don’t.

Meanwhile, Earnhardt has one DNF on his record, while Johnson has three, all in the last four races. Keselowski, though, hasn’t had to call it an early day at all this season, but only has 10 top-10 finishes to Gordon’s 15.

Through 21 races, Gordon has finished every race and completed all but one (Talladega) on the lead lap.

In 1995, when Gordon won the championship by 34 points over Dale Earnhardt Sr. under a different points system, he only had three DNF’s in addition to seven wins, 17 top-five finishes and 23-top 10’s.

By the 21st race that year, Gordon already had five wins and 13 top-five finishes with a 167-point lead over Sterling Marlin.

Gordon failed to finish just two races while going on to win 10 in 1997. Despite the double-digit wins, he won the championship by just 14 points over Dale Jarrett.

That’s something we can’t forgive you for forgetting.

While it was the year NASCAR celebrated its 50th anniversary and Earnhardt Sr.’s only Daytona 500 victory, it was also the year Gordon put his personal stamp on the sport.

It wasn’t even close.

Twenty-one races into the season, with a 97-point lead over Martin, Gordon had eight wins, just like the year before. The difference was that Gordon, at 27 years old, found a way to win four straight races in the middle of the season. The victories came at Pocono, Indianapolis, Watkins Glen and Michigan.

Also, those four races were in the middle of a stretch when Gordon and the Rainbow Warriors won seven of nine races and didn’t finish outside the top five for 17 straight weeks.

That’s not a typo.

When it was all over, Gordon won 13 races, tying Richard Petty’s modern-era record, with just two DNF’s. Martin was a distant second in the standings, coming up 364 points short under the old points system.

With Robbie Loomis as his crew chief, Gordon had four wins through 21 races in 2001, in addition to 12 top-five and 13 top-10 finishes. Gordon enjoyed a 160-point lead over Dale Jarrett.

The team’s only two DNFs came within the first five races of the season. When Gordon claimed championship No. 4, with a 344-point advantage over Tony Stewart, he had six wins, 18 top-fives and 24 top-10s for an average finish of 11th.

In the 13 years since his last title, much has changed in the sport. The points system has evolved multiple times and NASCAR added the Chase for the Sprint Cup. Of course, Gordon hasn’t won in the Chase era, coming closest in 2004 and 2007.

The biggest change for Gordon during that time occurred away from the track. After divorcing his first wife, Brooke, in 2003, Gordon married Belgian model Ingrid Vandebosch in 2006 and the couple have had two children together.

“That’s the kind of year that we’re having. We’re just putting everything we possibly can into it.”

With 15 races left in the season, a lot can happen for Gordon, but he has proven through the first 21 races that he still knows what it takes to get it done.