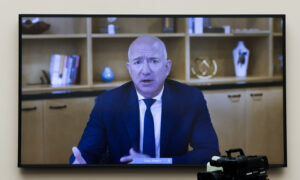 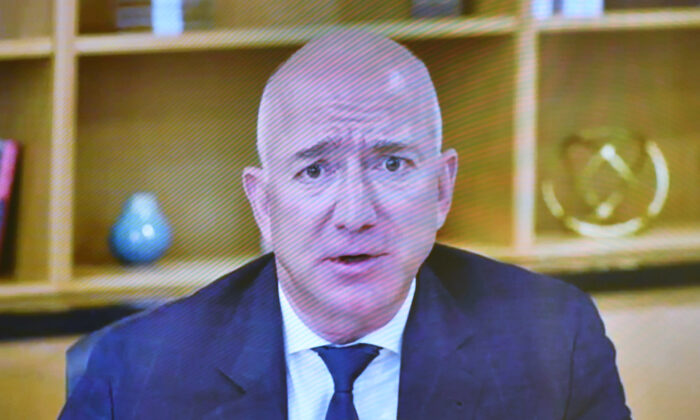 Amazon CEO Jeff Bezos is seen on a screen as he testifies before the House Judiciary Subcommittee on Antitrust, Commercial and Administrative Law on "Online Platforms and Market Power" in the Rayburn House Office Building on Capitol Hill in Washington, on July 29, 2020. (Mandel Ngan/File Photo/Pool via Reuters)
US News

Amazon founder Jeff Bezos, one of the richest men in the world, would owe some $2 billion a year in state taxes if Washington state legislators pass a proposed wealth tax.

The bill (pdf) would impose a one percent tax on financial intangible assets, exempting the first $1 billion of assessed value.

Bezos’s net worth is estimated at around $200 billion.

According to state Rep. Noel Frame, a Democrat who helped craft the legislation, the state Department of Revenue estimates the bill would bring in $2.5 billion a year by taxing some 100 billionaires.

The analysis includes confidential taxpayer data from the Internal Revenue Service and other information, Frame told questioners on Twitter.

It’s not clear whether the estimate includes Bezos; Frame said Bezos “may not be domiciled here anymore.” Amazon didn’t return an inquiry.

Jared Walczak of the Tax Foundation projected that 97 percent of the tax revenue would come from four of approximately a dozen people held liable for the tax, including Bezos, Microsoft founder Bill Gates, former Microsoft executive Steve Ballmer, and Bezos’s ex-wife Mackenzie Scott.

Walczak posited that one or more of that small group could change states of residency in order to avoid the tax, with the ability to spend up to 182 days a year in Washington state if they could prove another location was their primary place of residence.

Bezos is set to step down as Amazon’s CEO later this year and he already spends periods of time in Washington, D.C. Gates is retired from Microsoft and Ballmer owns the Los Angeles Clippers basketball team.

“To kickstart our economy, provide resources to invest back into our communities, and rebalance our upside-down tax code, let’s pass this common-sense tax on extraordinary profits,” state Rep. Tana Senn, a Democrat, said in a statement.

Legislators in New York and California have also proposed wealth taxes. President Joe Biden campaigned on a wealth tax and some members of Congress have floated the idea.

Biden’s plan would focus on raising taxes for households making $400,000 or more. He wants to raise the corporate tax rate to 28 percent, impose a minimum tax on book income, and raise the top individual income rate back to 39.6 percent. He also hopes to force people making more than $1 million to pay the same rate on investment income that they do on their wages.