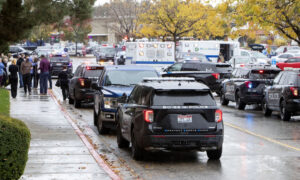 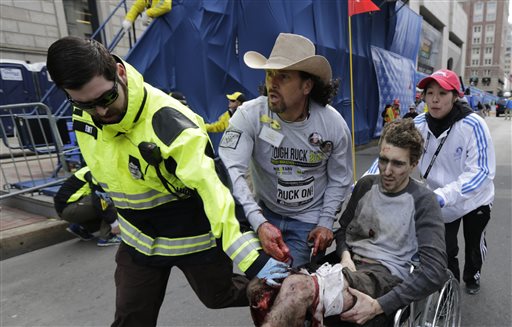 Jeff Bauman FBI:  Jeff Bauman, one of the victims in the Boston Marathon bombing who lost his legs, spoke with the FBI to help identify one of the two suspects in the case, Tamerlan Tsarnaev, who was killed on Friday morning.

The image of Bauman shown being rushed in a wheelchair by paramedics and helpers was one of the most iconic photographs of the incident. It was reported that Bauman was waiting for his girlfriend to finish the race when the bombs went off, taking out both his legs.

Bloomberg News reported that he looked into the eyes of Tsarnaev, 26, just before the bombs detonated. When he regained consciousness, Bauman reportedly asked for a pen and paper.

“He woke up under so much drugs, asked for a paper and pen and wrote, ‘bag, saw the guy, looked right at me,’” his brother, Chris Bauman, told the news agency.

He also spoke about the suspect to the FBI while he was in intensive care.

“I’ve had many times alone with him, and yes, he told me every single detail,” Chris Bauman said.

Carlos Arredondo, a cowboy-hat clad man, was credited for saving Bauman’s life. He reportedly helped rush Bauman in a wheelchair to safety and grabbed a sweater to use as a tourniquet to staunch the flow of blood.

“That was a whole marathon,” Arredondo said, according to the New York Daily News. “Getting people out of the way and getting him help.”

The dead suspect, Tsarnaev, and his younger brother, Dzhokhar, were described as modest and athletic. However, Tsarnaev reportedly had issues with American culture.

“I don’t have a single American friend, I don’t understand them,” he once told a photo essayist before a boxing competition in Salt Lake City, according to USA Today.

But his uncle, Ruslan Tsarni, described the two as “losers” and called on Dzhokhar, a naturalized American citizen, to turn himself in.