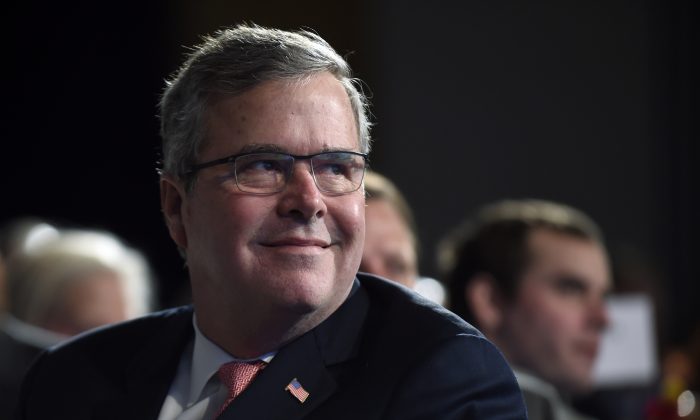 In this Nov. 20, 2014 file photo, Jeb Bush listens before speaking at the National Summit on Education Reform in Washington. (AP Photo/Susan Walsh, File)
US

Former Florida Gov. Jeb Bush outlined his views on foreign policy in a speech Wednesday, one that was nominally different from his father’s and brother’s but in practice embodies the same hawkish stance that marked their presidential legacies.

“I love my father and my brother,” Bush said at the Chicago Council on Global Affairs. “But I am my own man—and my views are shaped by my own thinking and own experiences.”

Substantively, his foreign policy platform could hardly be more similar to his brother’s. George W. Bush’s presidency was marked by aggressive interventionism across the globe, and Jeb Bush’s rhetoric promised more of the same, calling for military support for Ukraine, a tougher stance on Iran, and support for America’s allies against radical Islam.

“If we withdraw from the defense of liberty elsewhere, the battle eventually comes to us anyway,” Bush said. “The enemies of freedom will never be content in their own dark corner of the globe, they must eventually strike out at America.”

He deplored the current level of military funding, which had fallen to 2.5 percent of GDP, and called on President Obama to “address the shortfalls in our defense spending.” Bush also blasted the president for being too soft on negotiations with Iran over its nuclear energy program, and called on Congress to pass legislation that would trigger sanctions if no agreement is reached.

If we withdraw from the defense of liberty elsewhere, the battle eventually comes to us anyway.
— Jeb Bush

“Iran’s intention is clear. Its leaders have openly expressed a call for the annihilation of the state of Israel. This is an existential threat to Israel and to the world, including the United States,” Bush said. “We could face large scale proliferation issues throughout the region…Iran’s neighbors will want their own nuclear capability because of this existential threat,” and called Iran’s nuclear programs the “defining foreign policy issue of our time.”

The neoconservative drive behind Jeb Bush’s foreign policy views is a known quantity. In 1997 he was one of 25 signatories of the Statement of Principles for the Project for the New American Century, which called for an aggressive foreign policy that used military force to spread American values around the world.

“That requires responsible intelligence-gathering and analysis, including the NSA’s meta-data program, which contributes to awareness of potential terror cells,” Bush said. “For the life of me, I don’t understand the debate that has gotten off track where we’re not understanding [that] we do protect our civil liberities, but this is a hugely important program to use these technologies that keep us safe.”