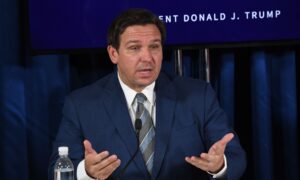 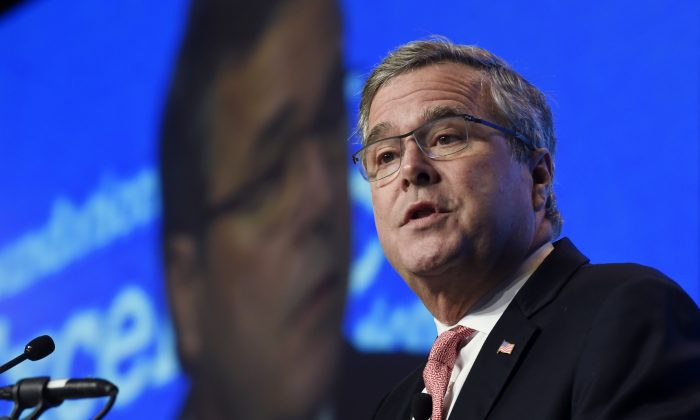 Former Florida Gov. Jeb Bush gives the keynote address at the National Summit on Education Reform in Washington on Nov. 20, 2014. On Tuesday, Dec. 16, 2014, Bush took his most definitive step yet toward running for president, announcing plans to "actively explore" a campaign and form a new political operation allowing him to raise money for like-minded Republicans. (AP Photo/Susan Walsh)
Politics

TALLAHASSEE, Fla.—Jeb Bush answered the biggest question looming over the Republican Party’s next campaign for the White House on Tuesday, all but declaring his candidacy for president more than a year before the first primaries.

Bush, the son and brother of Republican presidents, is the first potential candidate to step this far into the 2016 contest, and his early announcement could deeply affect the race for the GOP nomination.

He is the early favorite of the GOP’s establishment wing, and his move puts immediate pressure on other establishment-minded GOP contenders to start competing with him for donors, campaign staff and national attention.

The 61-year old former two-term governor of Florida declared on Facebook he would “actively explore the possibility of running for president of the United States.”

While his statement doesn’t commit Bush to running, veterans of presidential politics described it as “a de facto announcement” that ends months of speculation about his intentions.

“This is news,” said Gov. Terry Branstad of Iowa, where the first votes will be cast in January 2016 caucuses.

Bush’s announcement raises more clearly the possibility of a dynastic presidential contest pitting him against Democrat Hillary Rodham Clinton. The former first lady will be her party’s overwhelming front-runner should she decide to run.

Assessing the Bush family legacy, Kentucky Sen. Rand Paul said, “It may well be a huge benefit or it could also be a liability.”

“The question is whether people will tire of having one family in charge of things,” said Paul, himself a likely candidate.

In a holiday message posted a day after an appearance in South Carolina, another early voting state, Bush said he discussed the “future of our nation” and a potential bid for the White House with family members over the Thanksgiving holiday.

“In the coming months, I hope to visit with many of you and have a conversation about restoring the promise of America,” he wrote.

He has long been a favorite of establishment Republicans who care less about conservative ideology than reclaiming the White House.

In a race likely to include fiery conservatives such as Sen. Ted Cruz of Texas and former neurosurgeon Ben Carson, Bush will occupy the middle ground despite his overwhelmingly conservative record as Florida’s chief executive from 1999 to 2007. The potential field grew further Tuesday with word that Sen. Lindsey Graham of South Carolina and former New York Gov. George Pataki might run. Both would be longshots.

Bush also gives his party a powerful tool for courting the nation’s surging Hispanic population. Bush is married to a Mexican-American, speaks Spanish and has been among the GOP’s most outspoken advocates for an immigration overhaul — including a pathway to citizenship for immigrants who are living in the country illegally.

“This is a de facto announcement,” said veteran Republican operative and former Minnesota Rep. Vin Weber. “When a Bush gets into the race, he’s assured of grabbing a bunch of the money and the talent and taking it off the table. It makes it more difficult for others.”

Still, his path to his party’s nomination is all but sure to require dispatching a collection of formidable political leaders, New Jersey Gov. Chris Christie, Wisconsin Gov. Scott Walker and Florida Sen. Marco Rubio among them.

None were scared off Tuesday, with Walker saying Bush’s action “doesn’t affect me one way or another.” Said Paul, “The more the merrier.” Added Christie, “I’ve got nothing to say about it.”

But prominent Christie supporter and Wall Street financier, Ken Langone, suggested that Bush’s entrance might be helpful for the New Jersey governor. “I think the American Republican Party’s going to be energized, so when we go on to the big fight, we’re going to have a much broader base with a lot more money,” Langone said.

Unlike many of his potential rivals, Bush has not been a candidate for any office in more than a decade. He won his second term as Florida’s governor in 2002, years before social media and trackers hired by opposing campaigns to record a candidate’s every move on video transformed American politics.

And in recent months, Bush has shown little willingness to pander to a tea party movement that didn’t exist in 2002 and now opposes his signature policies on education and immigration.

Within hours of Bush’s Tuesday announcement, the head of the Conservative Action Fund launched a petition against him.

“Together, we can stop a Jeb Bush run and give America a real chance to elect a true conservative president,” wrote Shaun McCutcheon. He said his organization would “do everything possible to get the right candidate for the White House in 2016 — and Jeb Bush isn’t it.”

Bush has continued to encourage changes to the nation’s immigration laws that include developing a pathway to citizenship. The approach, backed by most Democrats, is aggressively dismissed as “amnesty” by tea party conservatives. He has also refused to back off his support for the Common Core education standards, which were developed by governors in both parties but have become demonized by conservative activists in recent years.

“That’s the one issue that they’re talking about when it comes to Jeb Bush at this point,” said Greg Moore, New Hampshire director of Americans for Prosperity, part of the billionaire Koch brothers’ political machine. “Certainly, it’s going to be up to Gov. Bush to come here and fill out the rest of the picture.”

From The Associated Press. AP writers Thomas Beaumont and Catherine Lucey in Iowa, Philip Elliott and Alan Fram in Washington, Jill Colvin in New Jersey and Kathleen Ronayne in New Hampshire contributed to this report.